this was one of the things I had in my list before going to Korea, TO TRY THOSE MOVING RAW OCTOPUS. and on my last day in Korea, we went to a shop (it’s a 24hours shop!) with live octopus living on the tanks outside for breakfast!

at first, everybody will think it is GROSS. but, it is not disgusting. really. in fact, it tastes great! a very very good snack. a snack because it doesn’t fill you. 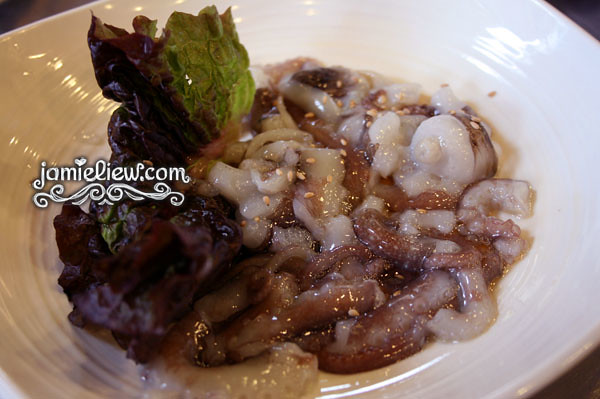 if I really have to explain how it taste like, I’d say, have you ever eaten octopus sashimi? well, it is similar. it might look wet and gooey but the truth is, I don’t feel any mucus or whatever slimy stuff. when you pick it up with your chopsticks, it just.. hardens @______@. and somehow, it’s crunchy because it hardened.

and the wriggling feeling and those tentacles sucking your tongue is one of the greatest (and most ticklish) experience. haha! you’d enjoy it. =P. 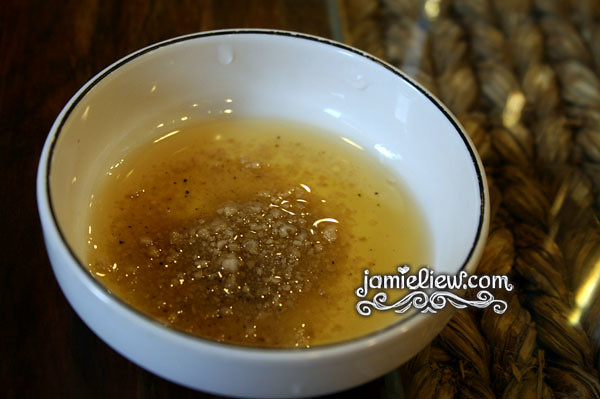 the yummy dipping sauce. consists of salt and sesame oil. this is the best sauce in my opinion. those chili sauce tastes very much like what you’d find in a yongtaufoo shop here. haha. 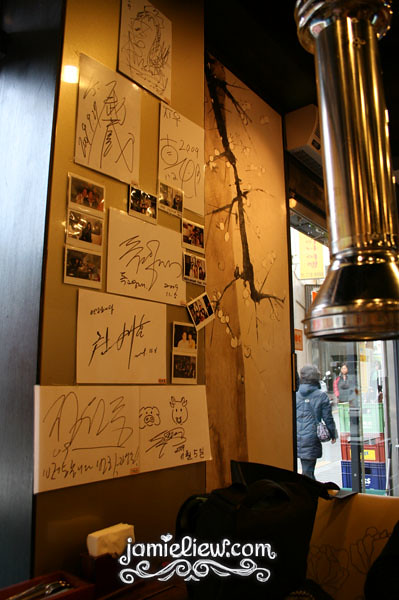 had out breakfast in one of the shops in Myeong Dong. forgot it’s name but it seems to be pretty famous with celebrity signatures stuck everywhere. it’s a decent shop. you can find it next to Pacific Hotel (Myeong Dong Exit 3).

one thing about it is the price. it costs 20,000 – 30,000won for a plate. that is about RM60-90. not cheap yeah. especially for something that doesn’t fill you stomach. and also, always CHEW it well before swallowing. every year there would be a few cases of people dying because they choked on Sannakji @@. but it is rare. so yeah, just make sure you chew thoroughly. 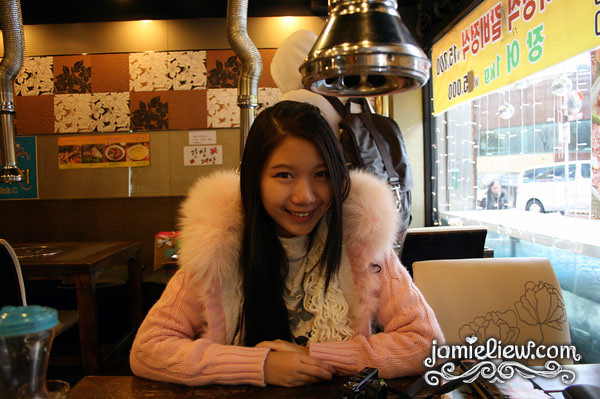 our total bill came up to 35,000won. around RM100. pretty pricey for a breakfast for two. we had Pajeon (korean pancake. the ones in this shop was absolutely delicious.) and Sannakji ONLY. haha. the Pajeon costs 15,000won (RM45!! for something made out of flour. and some vege). the most expensive one I’ve ever had. those in Malaysia are around RM25-30 only. T_T. but it really taste very good. and we had a whole table filled with Banchan 반찬 (the small plates of side dishes) there were at least 10 sidelines. madness. but yummy. <3.

my first time actually recording a video. I was really excited about eating it so I kept saying “jajang” (my own way of saying TADA!) some of you might just be annoyed by it. haha. pfft.

PS : it is NOT going to be just a once in a life time thing. it’s really really good. if I were to be in Korea again, I’d definitely look for Sannakji!

PSS : my voice is so weird when it is recorded. is it REALLY like this in real life? no wonder I am weird pfft because my weirdness starts from my voice T_T.

prolly you are the only person who can make ‘eating raw octopus’ doesn’t sound disgusting. lol now i feel like trying. =/

Someone stole you your nail design photo here:
http://nailpolished.blogspot.com/2010/12/christmas-nail-art-design.html

Thanks for the photos of the Autumn in Korea I will be going there in early November was wondering how it will be like…:) 2nd time there first time was winter so this time Autumn. The raw octopus video is really interesting thanks for the sharing. 🙂

Omo…the breakfast so expensive ka…aiks..maybe i will just go try the sannakji.