UPDATE on directions (20/6/2014) : you can take the subway OR ITX (you get seatings but it’s super annoying because it’s always sold out and it runs hourly. it costs around 6-7thousand won I think? it is also the fastest if you.. don’t end up having to wait for it) and take a taxi to Nami Island from the station. it’s walkable but.. might be too far for tired and lost foreigners. AS FOR THE BUS.. the bus way stated on this post is more of a dating kind of route as well as like some bus-ride experience. it’s more expensive though =(. outside of Nami Island you can take a bus and ride it to Petite France (HIGHLY NOT RECOMMENDED. I went there twice and didn’t like it both times >_>.) and the Morning Calm Garden for only 4,000won if I am not wrong. =).

Nami Island 남이섬 was one place I didn’t exactly plan to go. it was where Winter Sonata was filmed, and it is VERY FAR AWAY from the city. it takes approximately TWO HOURS just to get there. but I met some nice people at our guest house and they said it was BEAUTIFUL. convinced by them, we decided to go there on the second day as some major spots are closed on Tuesdays.

just so you know, it is not just an island which were the film set of a drama. but it was a really artistic place, it was beyond what pictures can tell. like a huge art playground; with loads of love. it’ll take away at least half of your day. it’ll be around 6-7pm when you’re back in Seoul. =). definitely worth a visit. especially if you’re there on autumn or winter– like how the movie is named.

also, make this a MUST VISIT SPOT if you’re there with your lover. *winks*. 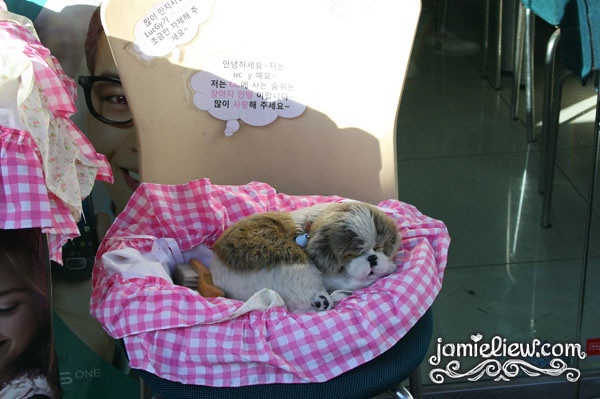 a completely irrelevant picture. the dog was seemingly sleeping. you can see it breathe. but only after the 2nd time seeing it I knew it was fake. PFFT. 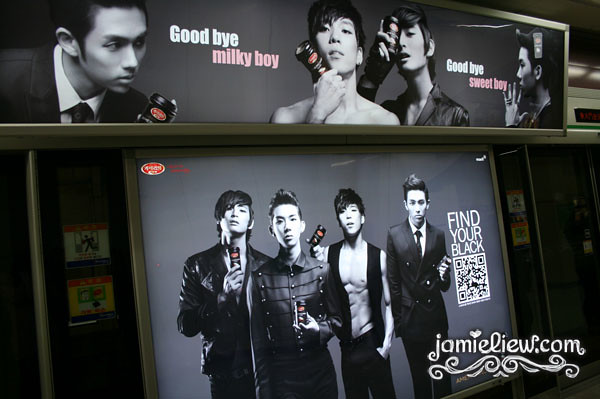 when 2am first came out,  I thought to myself, okay, only group that has no cute guys. but they are the type that, the more you look, the cuter they become. either that of they magically transformed! they are SUPERBLY HOT =D. especially Seulong <3. 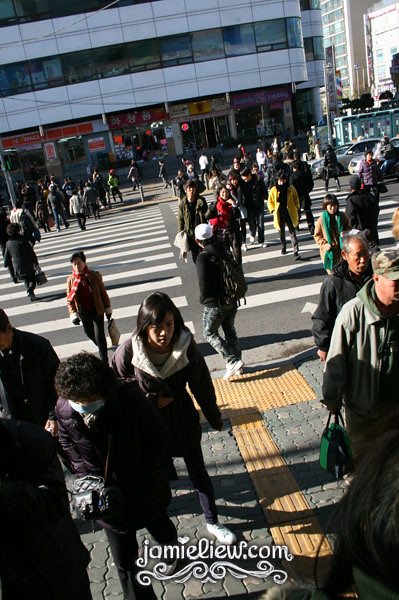 this is how DongSeoul looks like from the outside. only a minute walk away from the subway station. just keep asking around if you’re not sure where it is. Koreans are friendly. 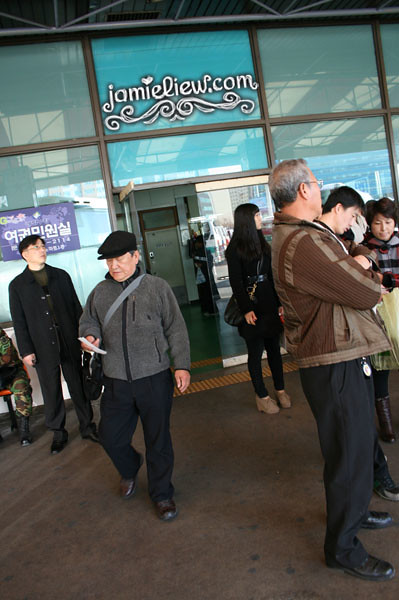 TADA! those bus exits which you’d see in most K-Dramas whenever a person want to leave and you’d see their “girlfriend/boyfriend” running through these doors looking for the bus their partner is on.

initially I thought your ticket would be checked upon these doors pfft. but I was wrong they only check it on the bus. 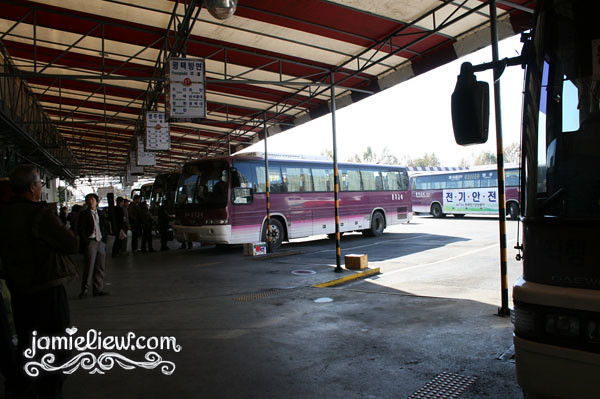 the buses. there is like 40 stops. this place is like, THE PLACE you’d come if you wanna get out of Seoul. it takes you to almost everywhere. 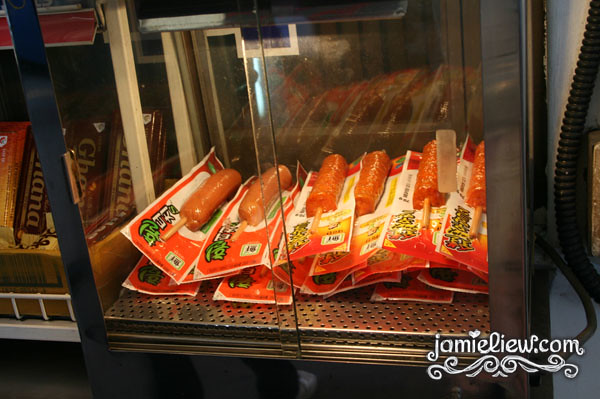 Korea have great sausages. they don’t make you feel like there’s a plastic wrapping the minced meat inside. and the Ghana on the left is my favourite Ghana chocolate! <3. MUST TRY. 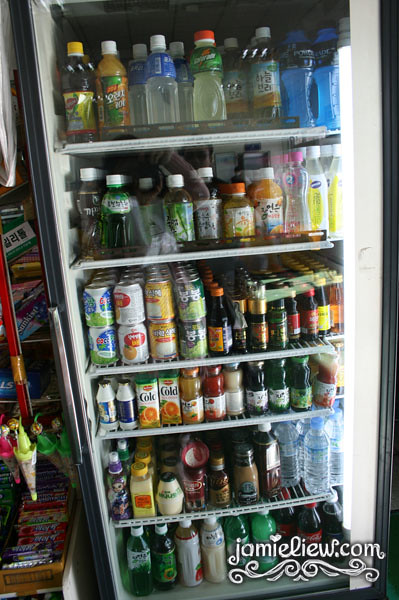 ALWAYS try their drinks. you’d find treasures. like that pink bottle inside, it’s a peach flavoured mineral water. it costs 1000won for one. might be a little too pricey for a small bottle like that, but it tastes AMAZING. it is addictive. and those banana milk are great too. <3. 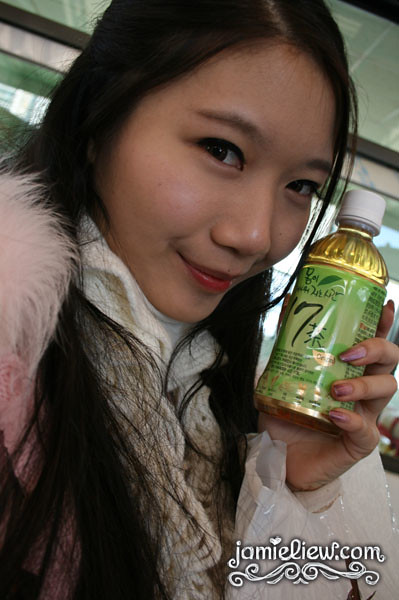 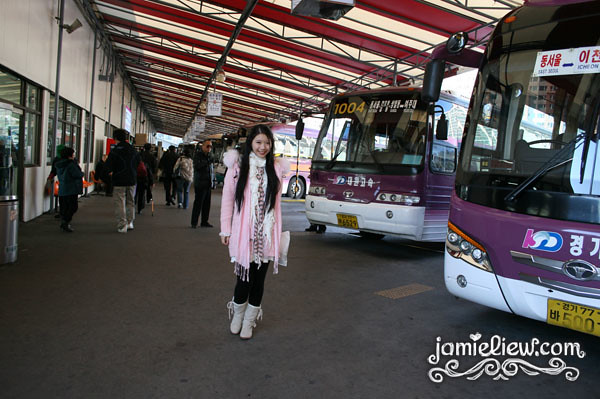 the thing about Korean fashion I’ve noticed throughout my trip is, most young Koreans wear dark cold colours. like black, blue.. but the older ones tend to wear shocking colours like PINK, YELLOW. and light colours are.. rare. during winter that is. 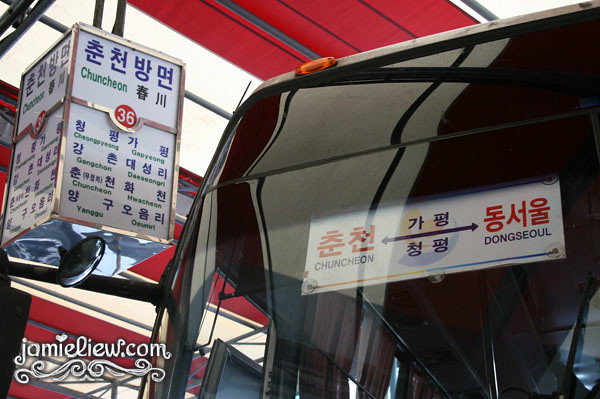 DIRECTION 2 : at DongSeoul 동서울, buy a ticket which heads to Chuncheon 춘천. costs about 7000won and this bus ride is about 2 hours long. you can sleep if you want to. 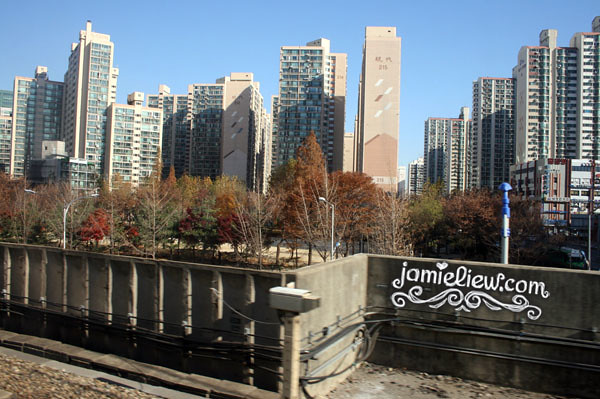 but I spent my two hours looking out of the window, enjoying the beautiful autumn scenery. <3. 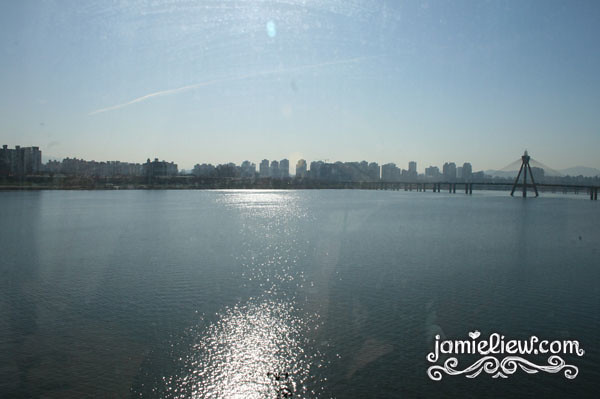 our Penang bridge was Korean made too, you know? (not too sure if they did the whole thing, but they were involved!) 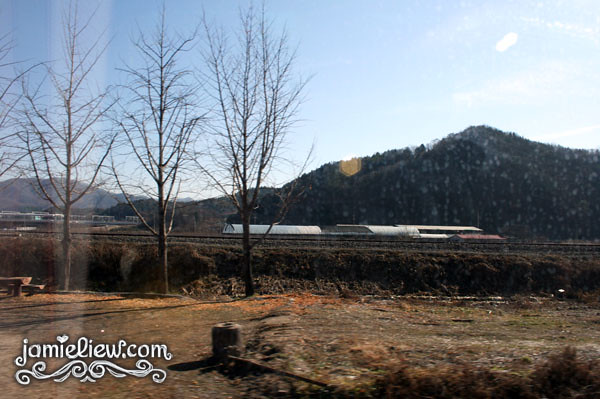 okay, going to Nami, you’d pass by a lot of remoted areas. but they are beautiful. nothing like Seoul. 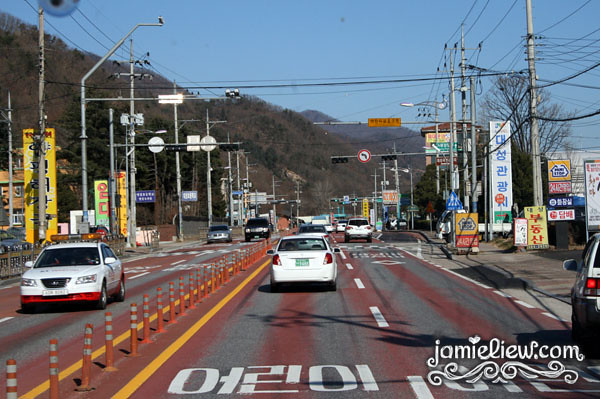 their roads are always so… new looking. WHYY!!! 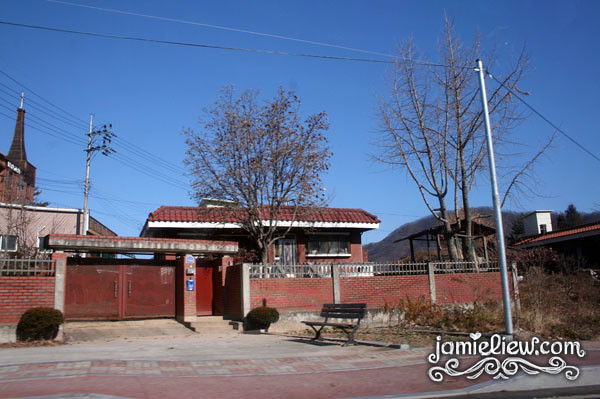 something you’d see from a K-drama? =D.

houses there just look so… peaceful. I cannot imagine what will happen if the Koreas were to have a war. 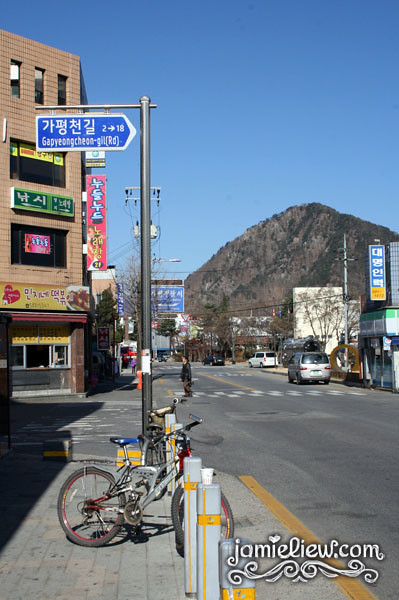 the bus will drop you at the Chuncheon bus station and you’d better look for a cab. it’s cheap, don’t worry, the place to take a ferry to Nami  is very near. very very near.

so yeah, DIRECTION 3 : look for a cab! and ask for Nami Island/ Nami seom나미섬. 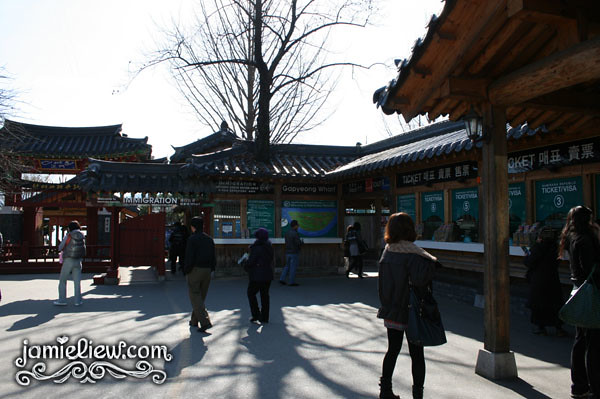 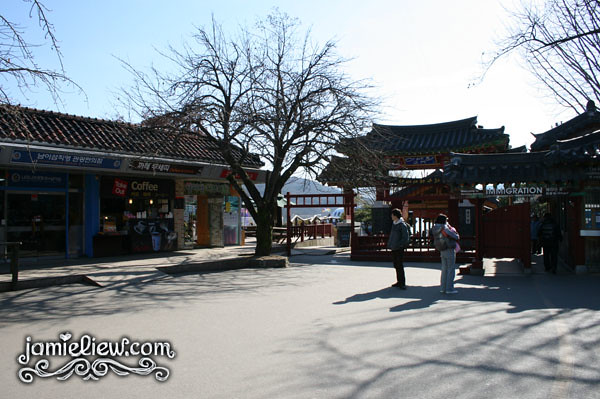 there’s a row of shops on the left. just in case if you are hungry, there’s plenty of food! 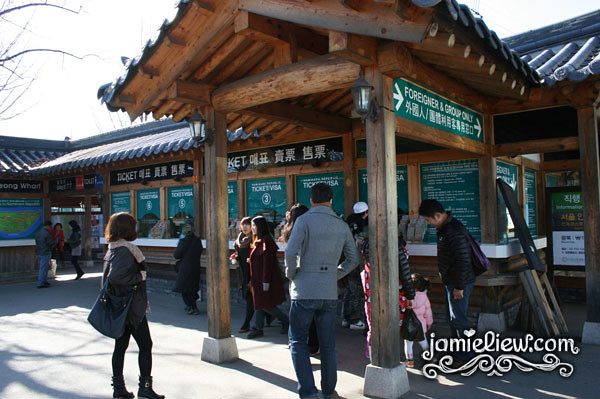 the counters to buy the ferry tickets. it’s around 8000won. it’s a bit expensive for such a short distance. but oh well, its a tourist spot. =P. 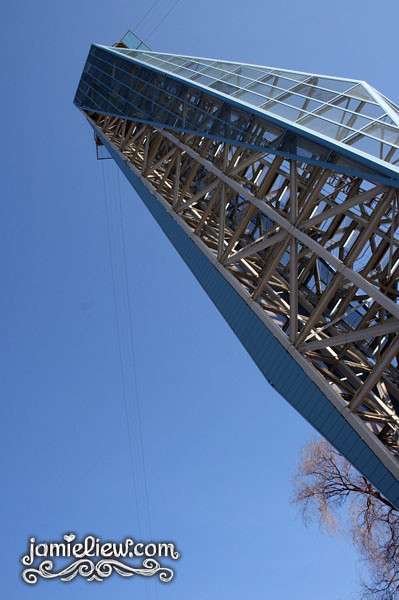 well, THERE IS AN ALTERNATIVE way to get to Nami. it’s by “flying” there via flying fox. haha but this will cost you 40,000won. =P. 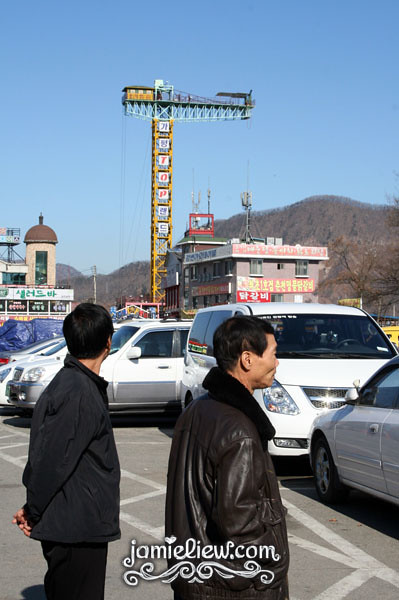 okay now guess what is!!

no, they’re not building anything there

you’ve guessed it haven’t you?

YES, BUNGEE JUMPING! how can they have flying fox without bungee jumping right? heh. 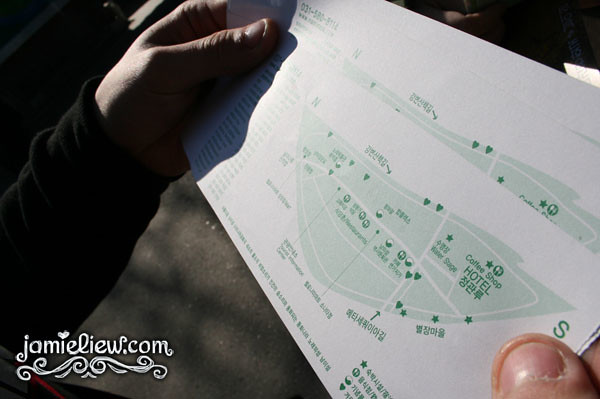 there’s a little map behind the tickets. stating those famous touristy spots. but in my opinion, JUST WALK AROUND THE WHOLE PLACE!

but before getting there, we got HUNGRY. so, street food it is! 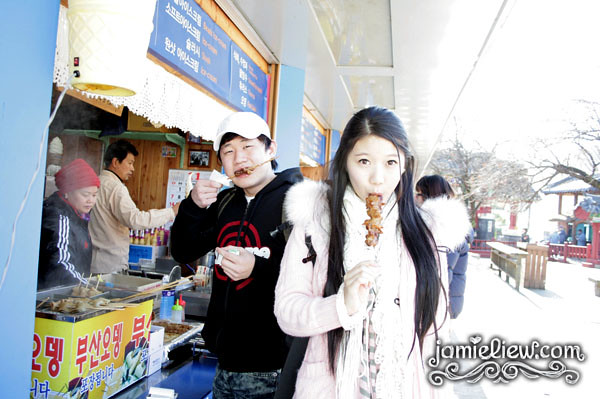 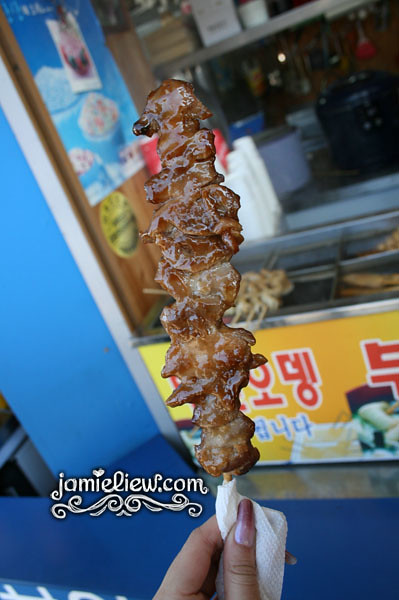 THESE ARE THE BEST CHICKEN I’VE EVER HAD. BEST. CHICKEN. 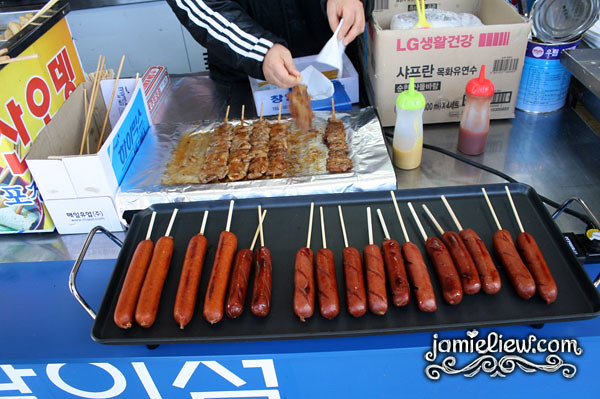 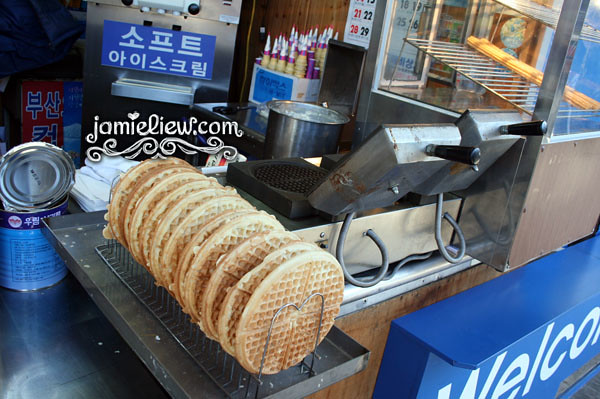 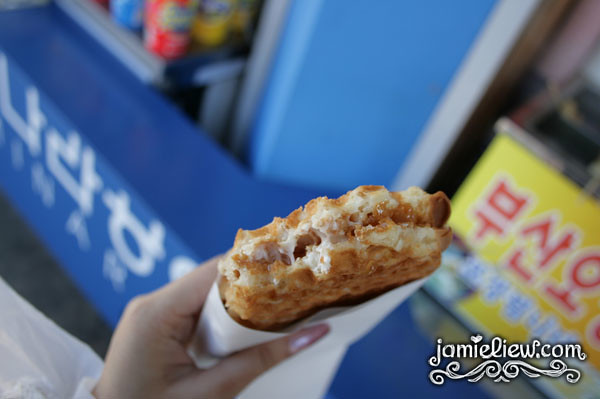 waffles with cream and apple jam stuffing. and SERIOUSLY, I am salivating just thinking about it. ohnyumnyum.

one thing about street food. they are expensive. maybe eating one or two is ALRIGHT. but treating them as lunch? we spent 30,000won here. approximately RM90. JUST ON STREET FOOD! imagine eating RM90 worth of Pasar Malam food. @@. but these are really good. we had Churros too! <3. 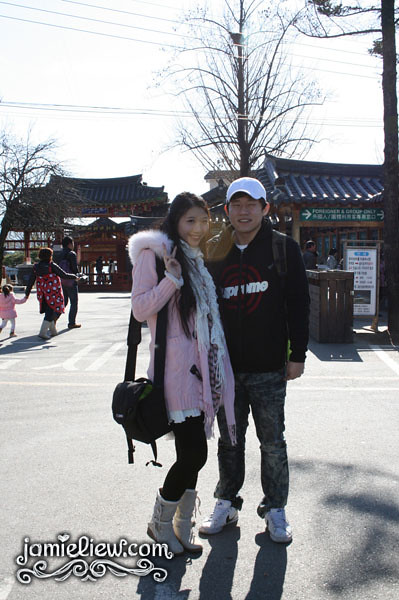 those beautiful Nami scenery next!

Great site u have going – totally inspires me for my trip to seoul next month.. i love bauhaus concept & dogs and was wondering if they’re open till late or until what time (your advise will be great), since i have only 3 days for my free & easy time to check out seoul .. do u think i should just check out bnukchon hanok village and give namsan a miss instead?
tx ! (will appreciate any tips for seoul trip)

tx a lot jamie! its gonna be cold but it wont be as bad as japan weather tis month… where will u be visiting next month? 🙂 and its the korean grand sale this year so there goes …