ever heard of Satay Celup? it’s basically lok-lok. but instead dipping it into boiling clear water, you dip them into boiling satay sauce! 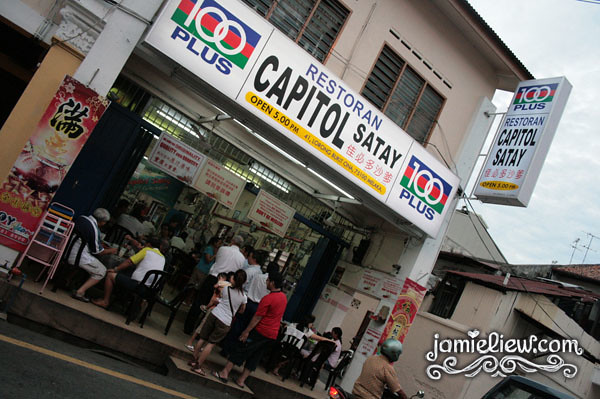 the most famous Satay Celup Restaurant in Malacca, Capitol Satay Celup. EVERYBODY in Malacca knows about it. so to find it, just ask around =D. we reached the shop at approximately 6pm, and there was already a long queue. so we rushed over and look. 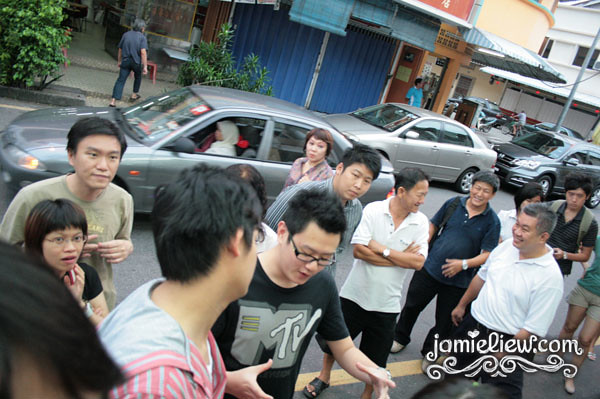 this is what’s behind us after 3 minutes? of waiting. it’s longer than what the picture shows actually, my bad estimation =(. 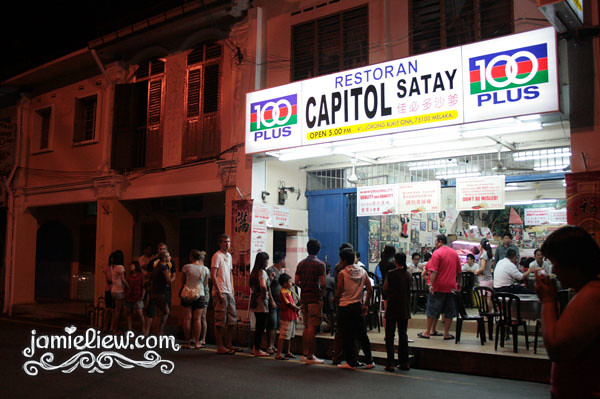 and we left at about 8pm. ate for about an hour plus hahahha. it was GREAT. and as a person so new to it, eating almost everything is a MUST. you need to TRY! =D 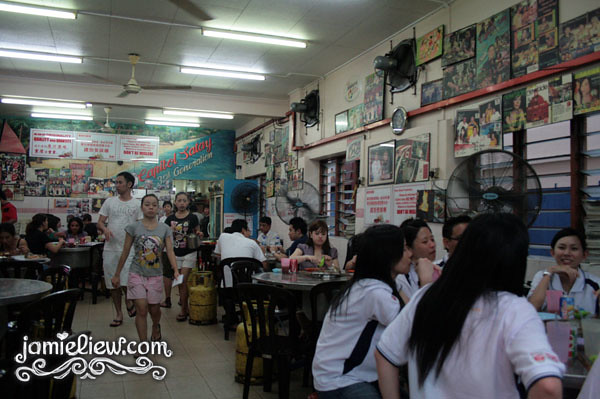 the inside seats. there are at most 10 tables from what I see, and their business is SO GOOD. pfft. look at the walls, most of them are singaporean celebrities. 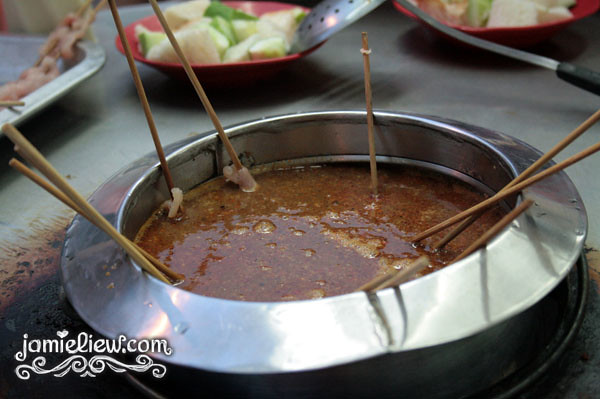 they soon later brought a bucket of satay sauce. about the hygiene, I am not really sure about if they REUSE the satay sauces. but we usually just dip in it and take it out anyways, not like we lick it and put it back inside. what’s disgusting in my opinion is, IF they really reuse it, what if somebody coughed into the pot =X. or tercough or something. don’t know lah! but I guess there are no complaints since it’s so “laku”. =P. 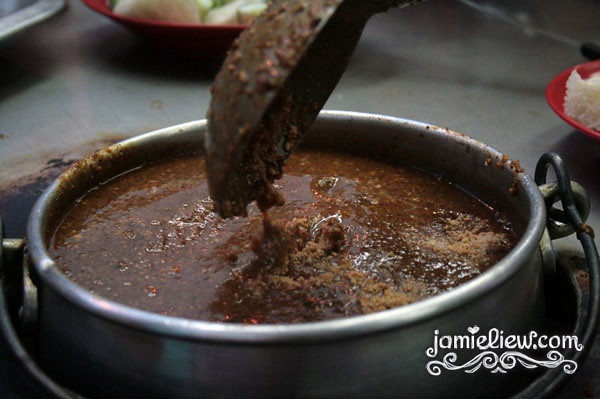 I have NO IDEA what they kept adding into the sauce, but it was AMAZINGLY DELICIOUS. peanuts and sugar was one of the things I spotted. and something else.. it’s like those fragrant stuff which could be found in rendangs. I don’t really know how to describe it but it’s those long thin thingys =X. very delicious when eaten =D. chewy too. 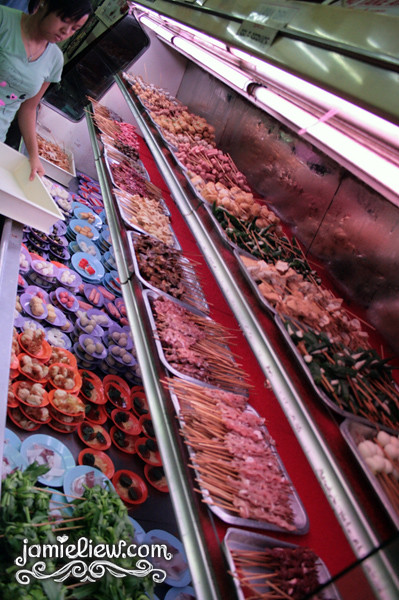 like the normal lok-lok, they charge by stick too =D. and they standardize it to 80cents each! =D. yum.

what I heard is so great about this place compared to the others, their seafood quality is really good.

quote from Natalie about delicious prawns : those prawns were literally bouncing! (haha she’s so cute and that is one good quote!)

and what she said could be applied to the prawns here. they are HUGE. I am allergic to them but I ate 3. to the lazy people out there : the prawns are skinned, don’t worry =D. 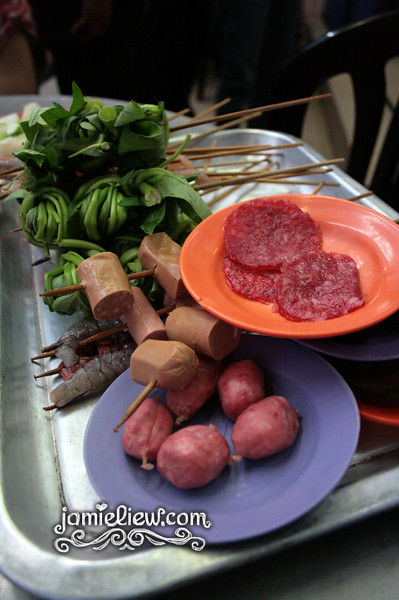 my choice. exclude the vegetables, those are fatty Darren’s! =P.

those taiwan lapcheongs were awesome. they are like the number 1 thing I’d look for in pasar malam but who knows what chunks are in there to make it so tasty. =X. sometimes certain lapcheong I ate in china tasted lik intestines. ew. T_T. this is awesome too though =P.

and intestines are awesome too I just said ew for fun. ㅋㅋㅋㅋㅋㅋㅋ. 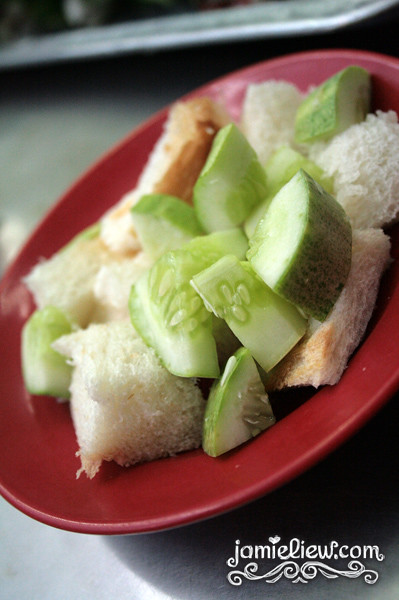 bread is a MUST order. it is SO DAMN GOOD. especially with the satay celup sauce. but then do be careful because dipping bread into the sauce is very different from dipping meat or cucumber in it. the bread soaked all the sauce in it, making it extra hot. watch out from burning your tongue! 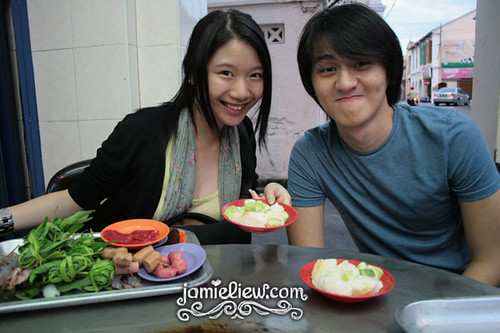 and hi Wei Zhong. you need a haircut. he hates appearing in my blog. but this one is rare okay Zhong? pfft.

aiyah I must take a picture with the food to prove that I was actually really there. =P.