minus the dinner part. too many pictures! 500 pictures in 2 days without major camwhoring is a LOT. 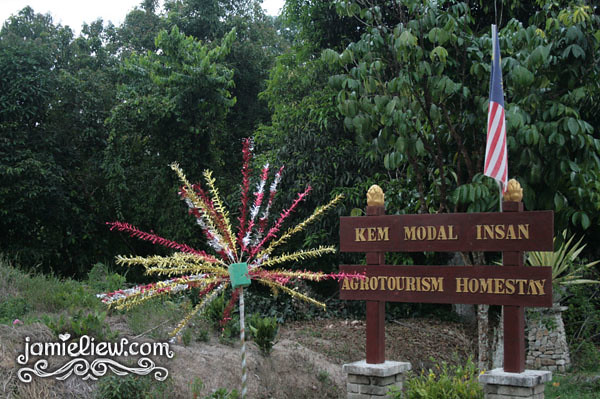 Kem Modal Insan – the name of the place is to tell you they’d make you a better person haha. but by the first sight of the name you might think it’s some sort of NS camp haha like mine, it was Kem Tegas Mesra. it’s 3 words and it starts with a KEM. =X. anyways, thanks Agrotourism and NewsZapped Media. =D. 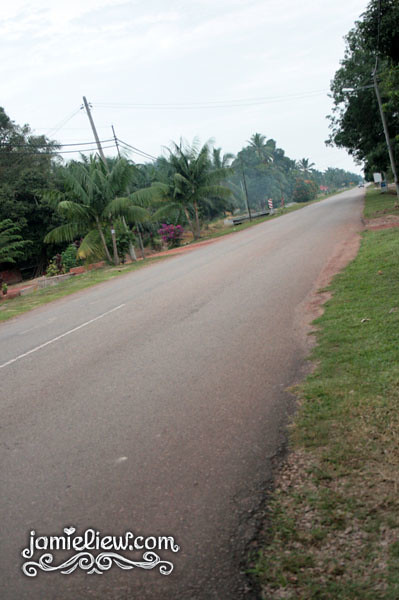 some people might like it, some won’t. if you’re a high class-person-who-only-loves-city-life, skip this post. haha. I liked how the road is so narrow with rows of houses along it. it’s.. warm. they are like a big family, everybody knowing each other, sharing food and fruits. 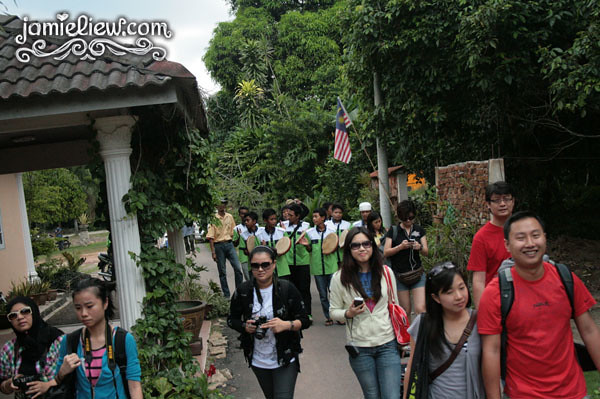 we were welcomed by a group of people in kompangs @@”. but they were in uniform that doesn’t look very traditional actually. hahaa. 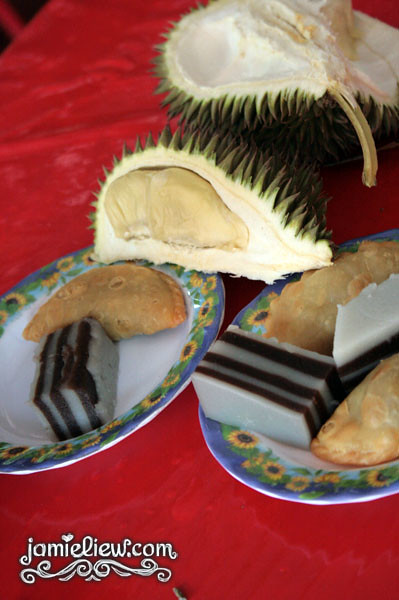 TEA! it was some malay chocolate kuih (not a fan of kuihs.) and awesome curry puffs with FABULOUS DURIAN. at first sight, the durian is really pale. I didn’t expect it to be nice at all. so I took one little bite. and IT IS SO HEAVENLY. THE MILKY, BITTER, SWEET TASTE. it’s heaven. for those who doesn’t appreciate durians.. well, LESS MEN MORE SHARE!

and since it’s kampung, nobody really needs make up =X. 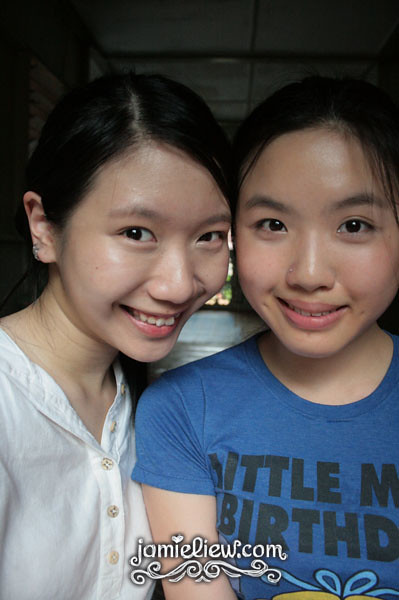 ADIK ZOE! we were divided into pairs/groups along with our foster parents. and my roomate’s ZoePorcelainSkin. 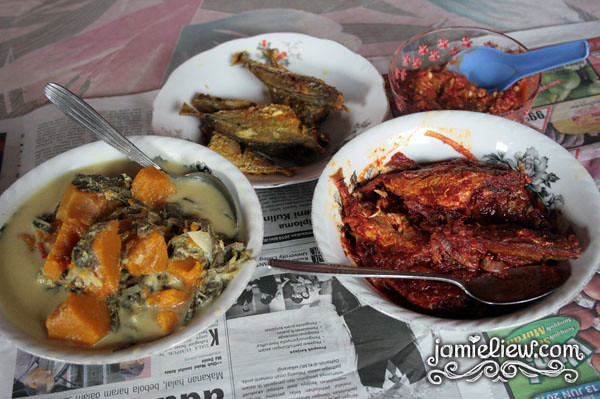 FIRST MEAL OF THE DAY! thats sambal fish, fried fish, sambal (they used the traditional way to make it! the stone thing? ) and the last and THE BEST, ubi kayu leaves with pumpkin + coconut milk. it’s HEAVENLY. some people got tempoyak as well T_T. but I consider myself lucky, mine’s really really good. =3.

FIRST ACTIVITY OF THE DAY! 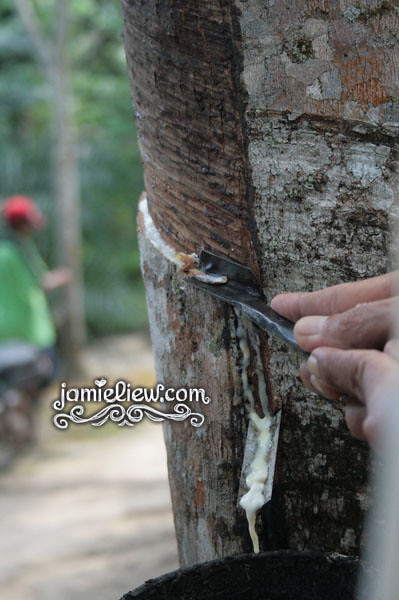 menoreh getah. I’ve heard this a zillion times from my grandma about how huge orang utans and elephants walk pass her while she hides behind the trees. but this is the first time doing it. it isn’t really difficult! =X. needs more practice only. =/. 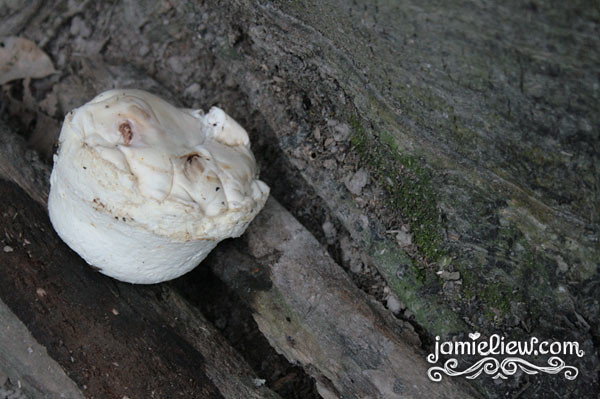 the hardened latex. DON’T TOUCH. it’s really smelly and I heard if you touch it with your bare hands, it’ll stay for DAYSSS. =X. 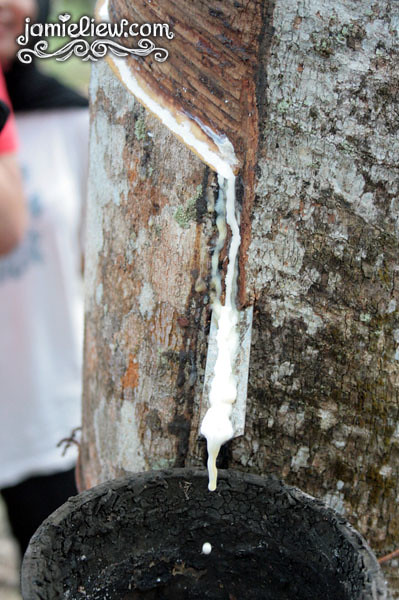 latex dripping down! I MENOREH-ED THIS TREE! 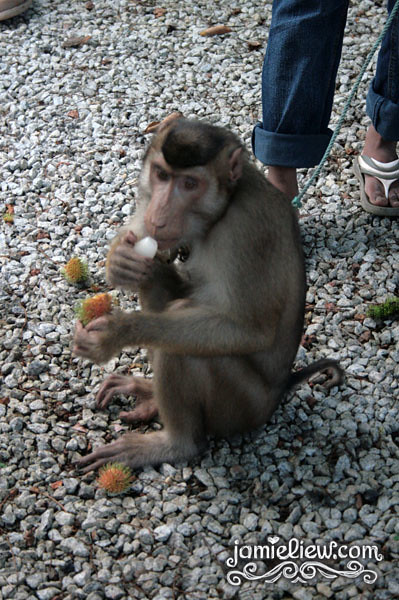 white faced monkey eating rambutan. according to them, this isn’t a monyet. it’s a beruk. which means a bigger version of monyet whom is more tamed and humanlike? I kind of pity the monkey. it doesn’t get to run around the forest =(. and according to the guy, it’s trained in a BERUK SCHOOL in Thai, who trains beruk to pluck coconuts @@. 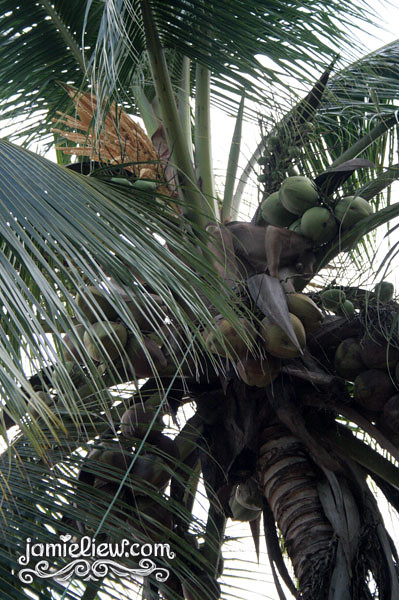 and this monkey plucks 300 coconuts a day! amazing much. my condo say wanna pluck coconuts also need 1k HAHHA. and the number of coconut trees are….. what, 10? or less. dunno. =X. 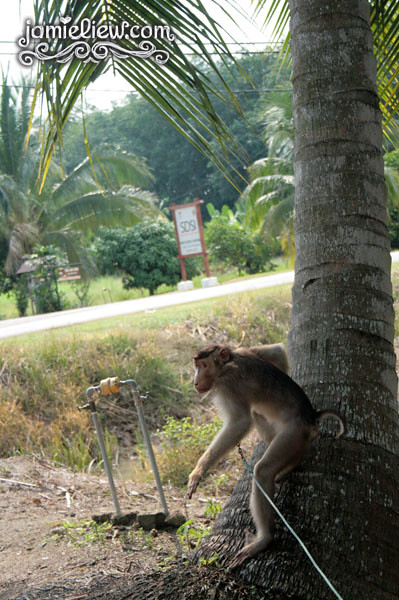 A NICE MONKEY PICTURE NO? =P. 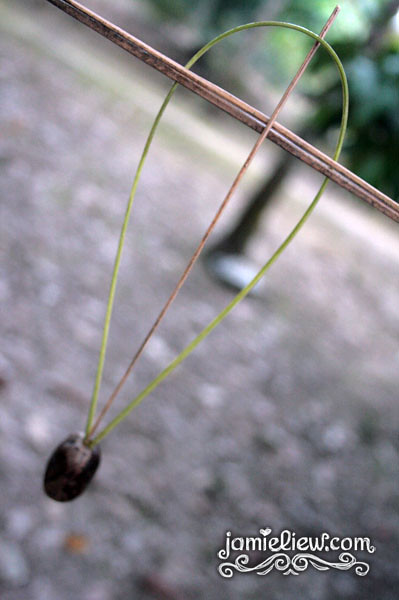 getah seed, satay sticks = kids entertainment in the kampung. it’s pretty fun but I got bored after 1minute. guess I am no longer a kid! =P. 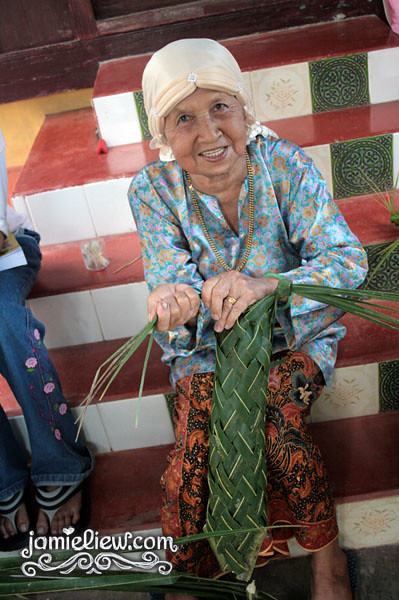 the kampung’s nenek whom menoreh’s the whole field of getah trees ON HER OWN teaching us how to stitch the jackfruit’s protection. apparently, it’ll expand as the jackfruit expands. and she also mentioned that a jackfruit will always be “invaded” by worms if it is not protected. it doesn’t matter if it has holes, as long as there’s a layer of something. 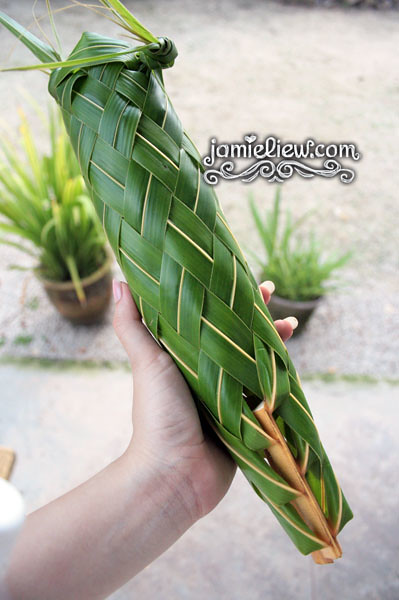 made by 2 pieces of 3 paired leaves coconut leaf. 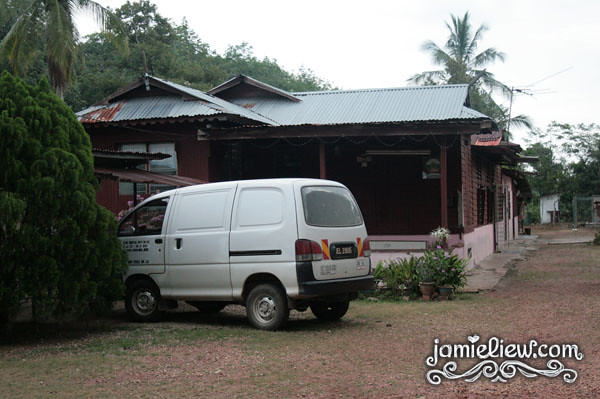 my kampung house! it might not be the best looking kampung house, but it really gave me an experience on WHAT IF I had a kampung home. my grandma stays with me and I am born in KL. never been to a kampung =(.

one thing lah, the weather is unbearable in the afternoon inside the house. but at night, FRIGGIN COLD.

making your own century duck egg? 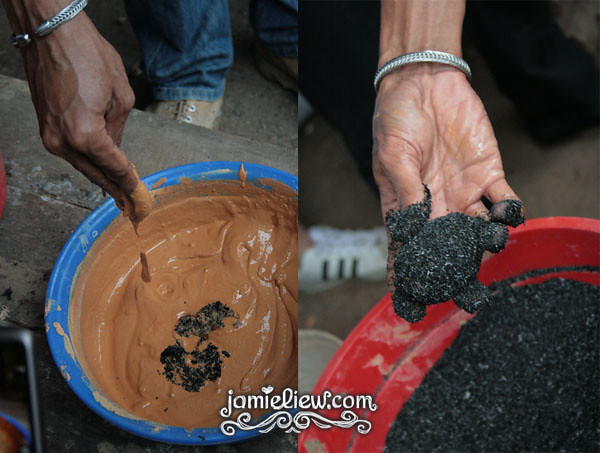 I never knew it’s wrapped with MUD+salt. really. and that black thingy is the skin of rice! fried. 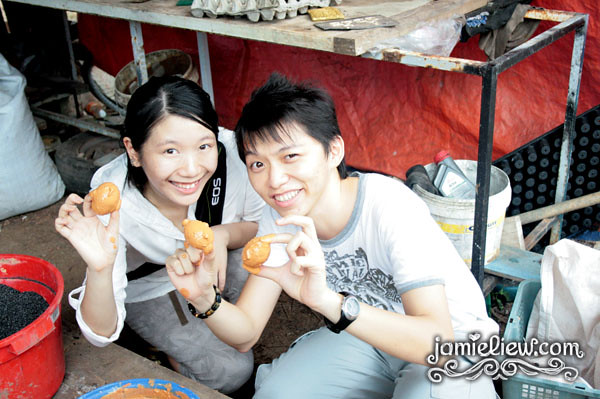 me and Tian Chad making our century eggs! my finger then smell of mud T_T. and salt. those mud are DAMNNNNN sticky. same reason why they used it to cover the egg. FULL COVERAGE AH. 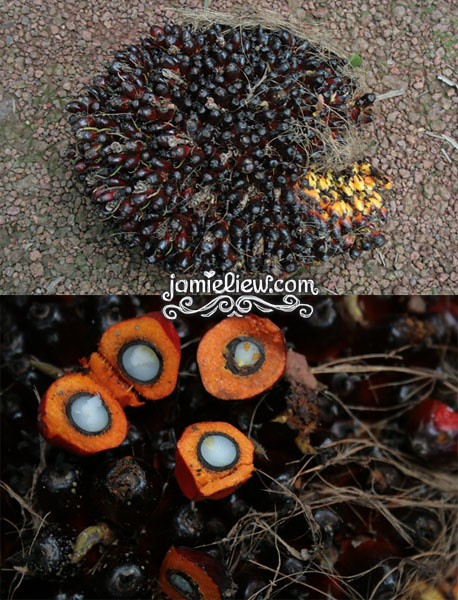 our minyak kelapa sawit! at first I thought it is a coconut wth. it’s actually really really small OILY seeds. by the way, I heard kelapa sawits are considered as FATS not OIL. so consume it more to become fat =D. 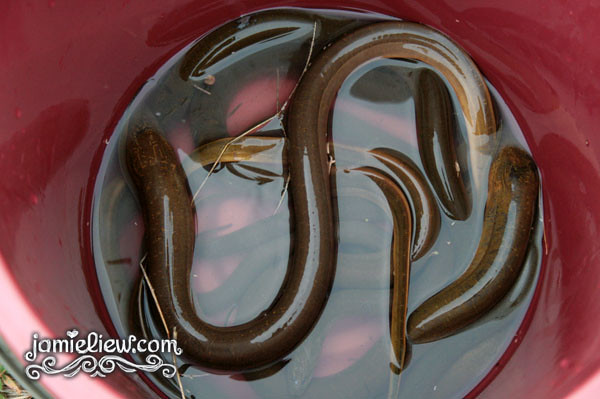 our catch the eel activity. I don’t know if its an inheritance from my dad who can’t even take the snakes showing on tv, I AM SCARED OF EELS. they are long and slimey T_T. JUST LIKE SNAKES. I yelled as if its a poisonous snake when somebody dropped it and it was slithering towards my direction. *shivers*

DURIANS! EVERYWHERE! FREE FOR EVERYONE! you see a durian on the floor, grab it. it’s yours to eat. the durian tree’s belongs to NOBODY and it tastes better than D24.+ 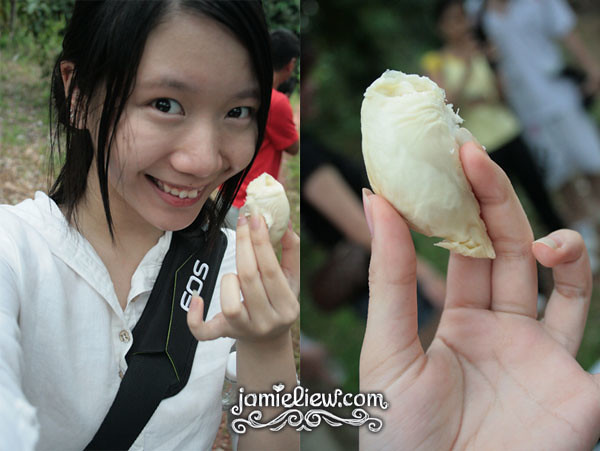 LOOK! this is what they call the Kampung Durian. rich, fragrant, smooth… and found everywhere! 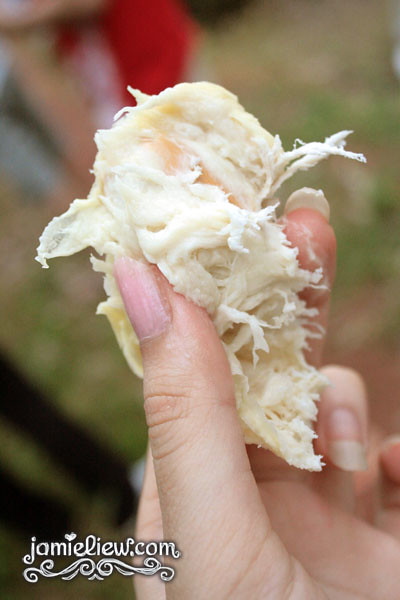 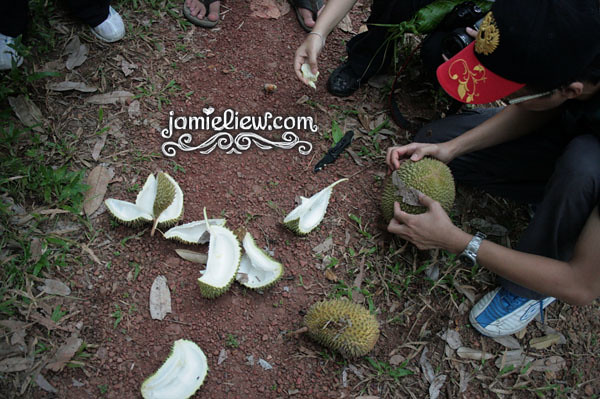 it was like a durian buffet. I had so much durian I got a huge pimple on my nose that very night T_T. 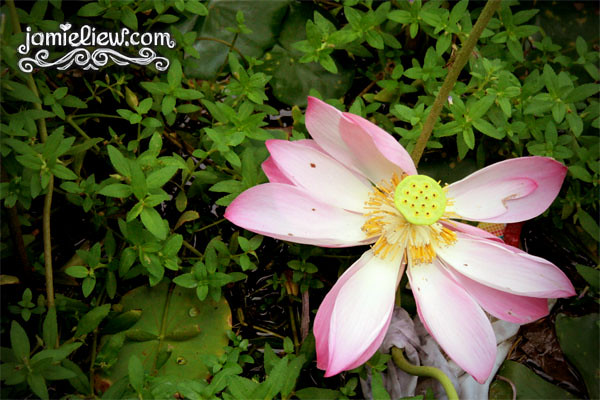 LOTUS! I thought this is a cinapek flower only found in cinapek places. but to my surprise, lotuses there are abundant!

I’ll leave rest of the night and the next day (another half-day =D) for my next post. I shall sleep! TOODLES!

Hello!!
You’re really lucky to be in such a beautiful place!!! wow!!…we don’t have so nice trees and nature in Italy!!
What is a Getah Seed??
Enjoy yourself!!
Ciao!
Laura

Hi!
IF YOU PLANNING TO VISIT MALACCA, AND NEED ACCOMMODATION, WE PROVIDE BUDGET BUT COMFORTABLE TRAVEL ACCOMMODATION.
Malacca Travel Accommodation provides you a refreshing style of Hotel Living which is complemented by an extensive range of amenities, recreational facilities, swimming pool and 24 hours security.