I AM NOT SEVENTEEN YET!

a few more days to go =D. I am born on mothers day! but since mothers day changes every year, this year it isn’t on the exact day of mothers day, instead, it is one day earlier. =D! I prefer being sixteen I don’t know why. maybe because it sounds better =/. and why do I have exams near my birthday everytime it is so not fair pfft. 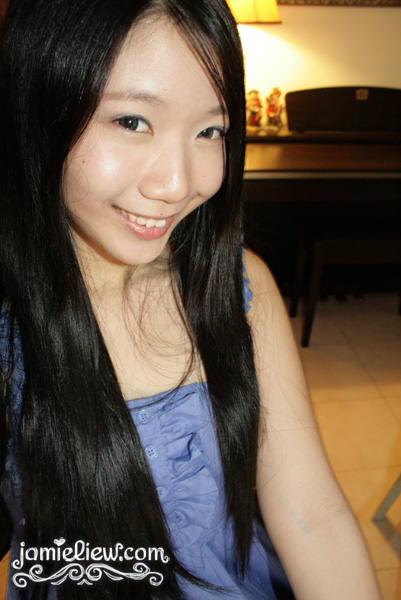 my white party where I will only allow everybody to either wear white (or pink) where I will wear something else =D. 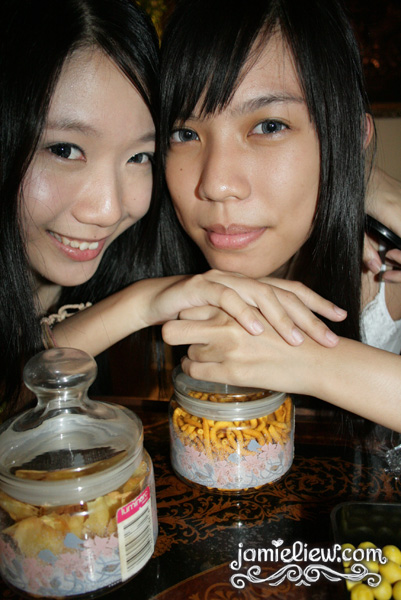 Sandra LEE is my best friend. she have the longest eyelash I’ve ever seen attached to ones eyes. it’s around 1cm ++ OKAY! we kind of measured it =X. she basically knows everything about me so she’s kind of the walking encyclopedia of Jamie Liew =D! and. 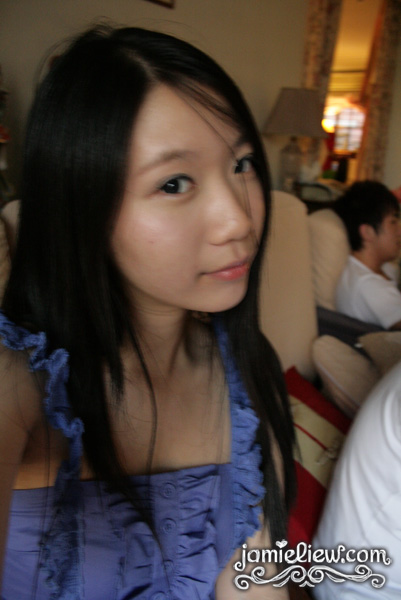 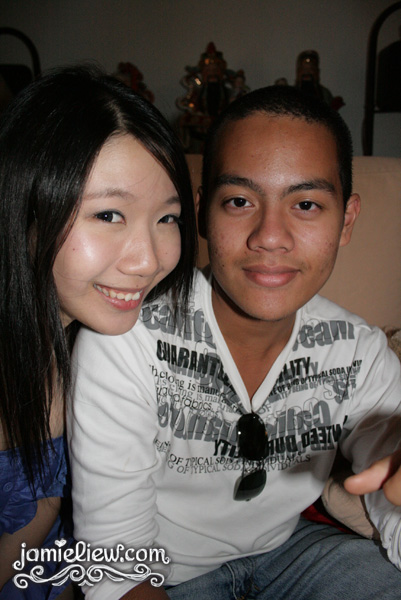 Azim is really sweet, he came here for a few hours eventhough he had to leave straight for Australia from MY HOUSE! appreciate it that he made such an effort, I really wonder if he had fun but I sincerely hope that he did! =D. 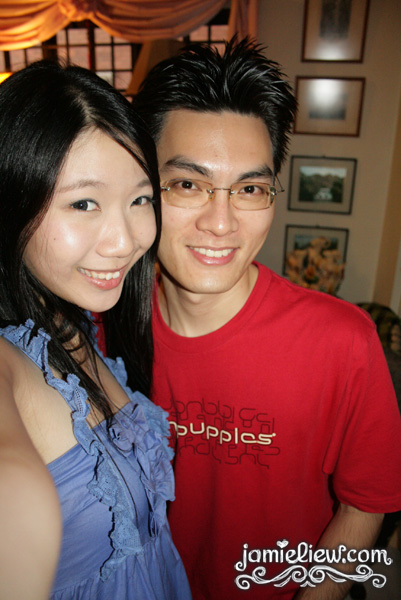 William Soo is my sister’s best friend. you would just not believe what he gave me. that is like one of my biggest surprise for this party! maybe because it is pre-ordered, maybe because it is so pretty, but in any way, I LOVE IT! THANKS! will show you later on in my next post =P. 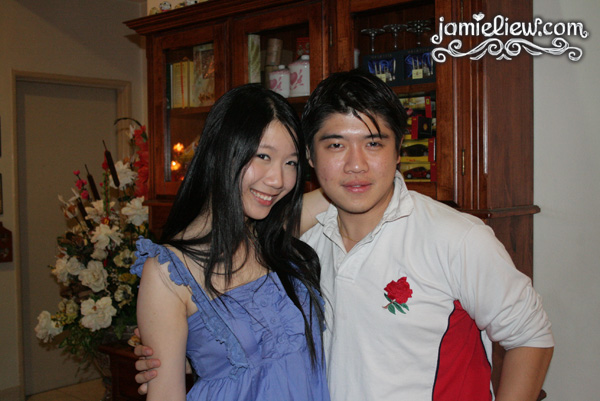 TOCKIE!! the biggest sweetheart of all times. =D. he brought his Nintendo Wii over and it got me so addicted to it, seriously it is like one of the most addictive game ever! I especially like the American Idol one HAHAHAHA. =X. 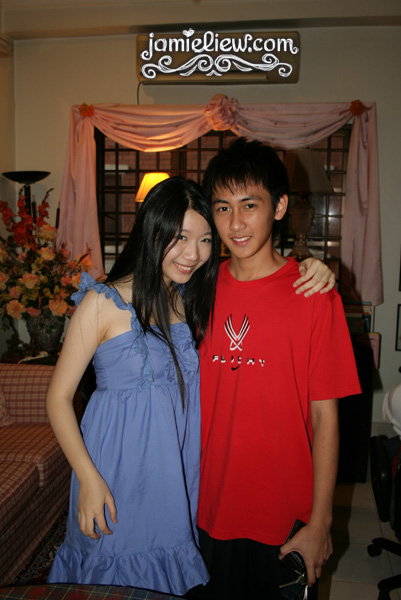 my 2 years-no-see friend, Adam Ch’ng Shun Yong. when we were young, he is a little shorter than me, and 2 years ago when he came for my form 3 birthday party, we’re the same height! and look at what happened now! T_T. congrats for scoring straight A’s! =3. and I am glad you came even it is just for 15 minutes =D!!!! 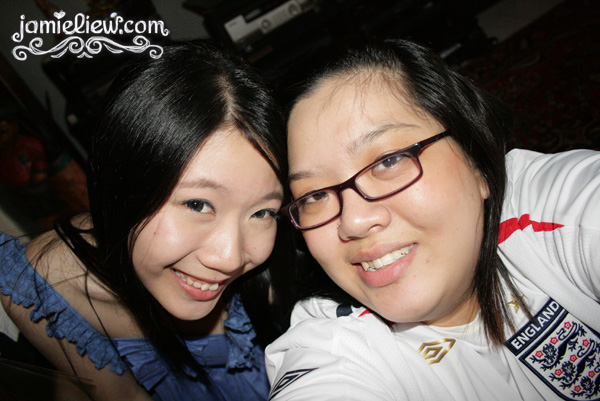 another evidence for my statement ” Sandra WONG is the COOLEST person! ” you just got to love her angles. and her nice and fun personality and all =3. she’s one of the few that stayed until 4am in the morning oh gosh it is just too fun having a party with her <3. 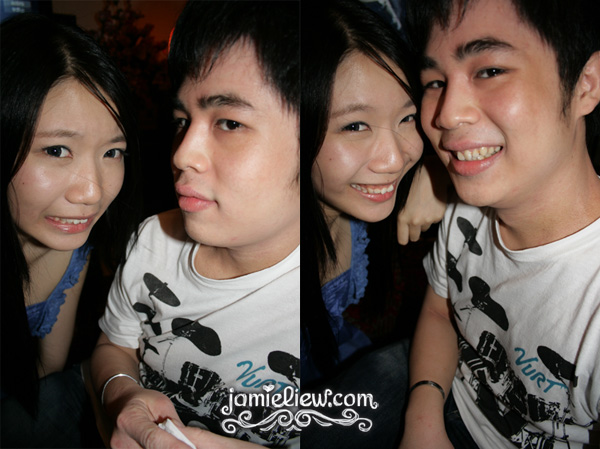 here’s Mr Gary Gah Ley. we kind of formed some few really cool names together when we were getting sampat one day. he kept calling me Jah Meh and when we combine our names stuff like GahJah, JahGah, GahMeh, MehLey came out! but I still prefer GahJah. so whenever we are together, we call ourselves the GAHJAHS! =D. okay, lame. I KNOW! 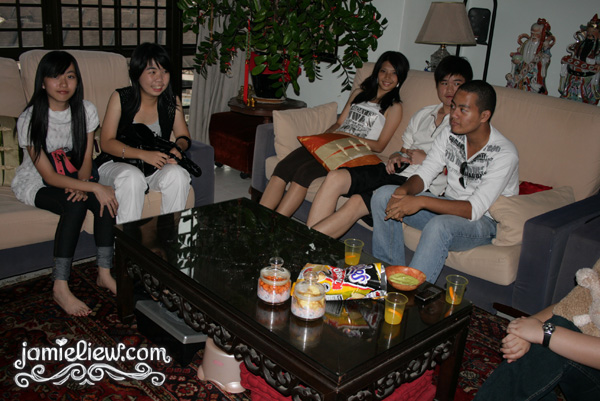 THIS would be the Sri Garden gang. to be honest, there are more people from Sri Garden than my own school =O. I know it is weird but it is trueeeeee! I am just not so close with my schoolmates, and most of them I invited FFK-ed me! =/. but I am really glad that they came! they don’t exactly live NEAR me you know =X. 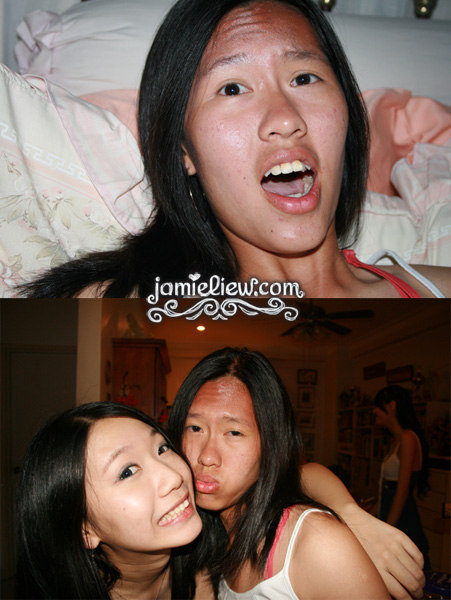 Chee Yern is sunburned! that is WHY, SHE SHOULD STOP VOLLEYBALL! agree people? YES. I love her a lot because she’s the funniest person in my entire school. and also she’s the add maths pro that teaches me add maths everytime when I am lost. ain’t she kind? =/. 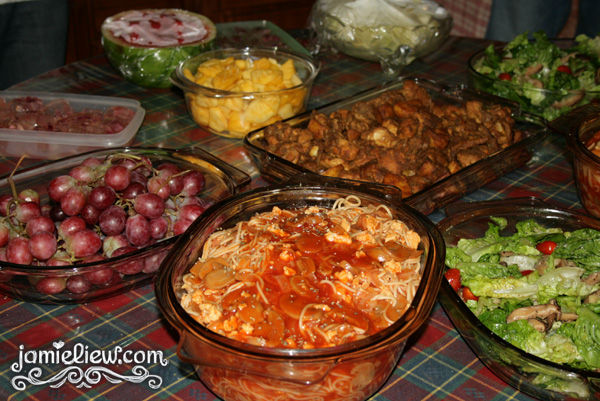 the food my mom spent 12 hours preparing! she woke up at 7 to prepare all these until 7pm! (oh yeah, supermarket is included hahaha). my mom is like the best party planner as of now. I THINK. because every dish cleared of entirely! 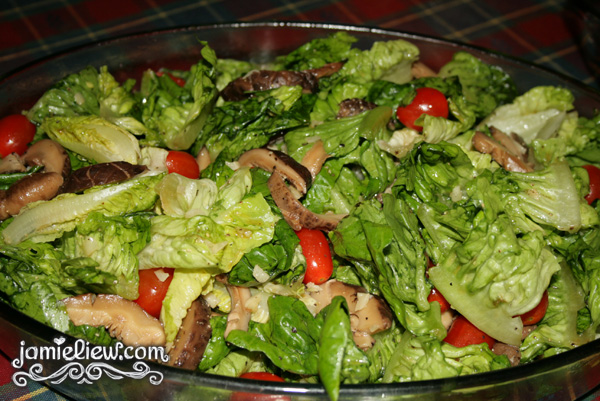 and her most popular salad that was gone in a while eventhough she prepared like A LOT. everybody love this, including me =D. my favourite salad, will come up with a post on how to do it later on heheee. I call it the Japanese Style Salad =3. because there’s no MAYO! and it is COMPLETELY healthy! 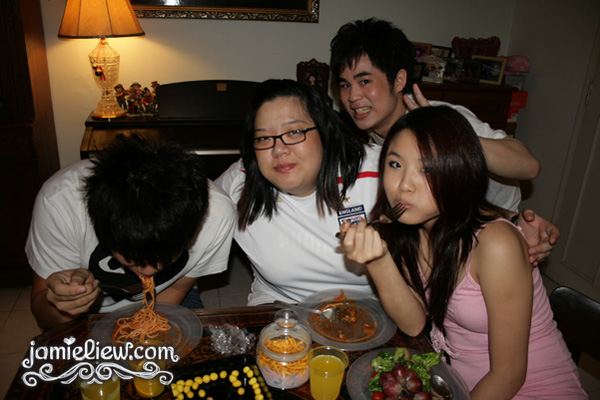 Zoe had bunches of it =P, she really love it it seems =D! my darlings enjoying their food. 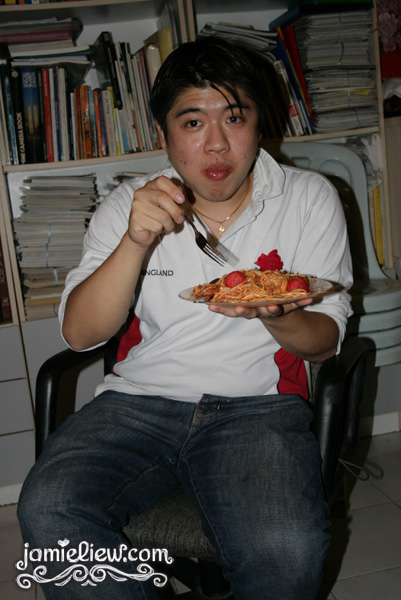 the PRICELESS picture! try and guess what are those round red things! =3. 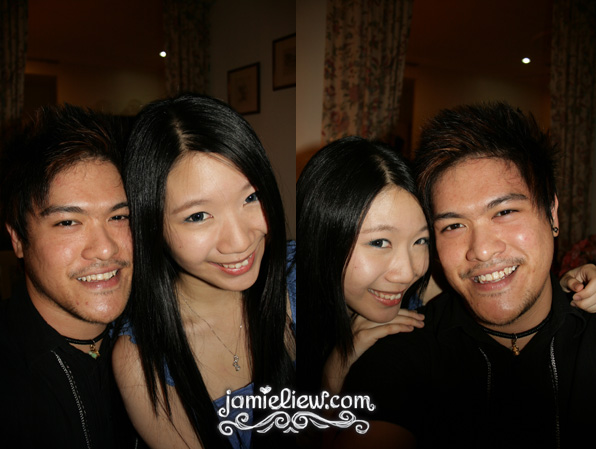 so here is Darling Simon So who once commented that I live in the jungle. because it took him almost an hour to reach home from my place ahhahaa. =X. but I am so glad that he came! I thought that he won’t because of the scary distance but he did! awwwww <3. and do check out his blog because he have the cutest dog in the entire friendlist of mine =3. 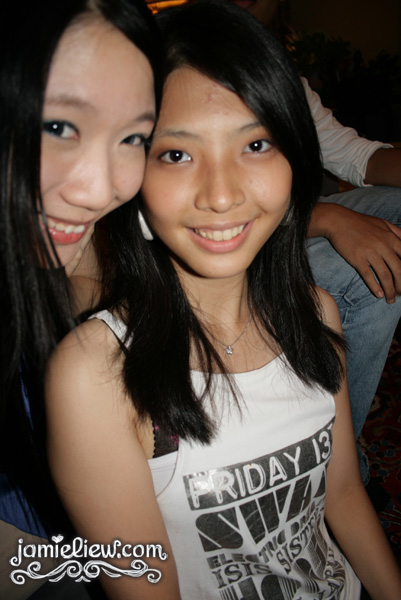 Michelle is one of my new made friend in my best friend’s party last year. she’s really nice and as you can see, absolutely hot. =3. and what’s more? she’s nice and charming!

we played a very short game of Kings, until suddenly all of them had to go home and then the cake cutting session proceeds.

the game is really simple. we will distribute cards to everybody and the person who gets the KING card have the power to ask any number of any pattern to do something to another person of another card. it is REALLY REALLY fun. and the lucky two was… 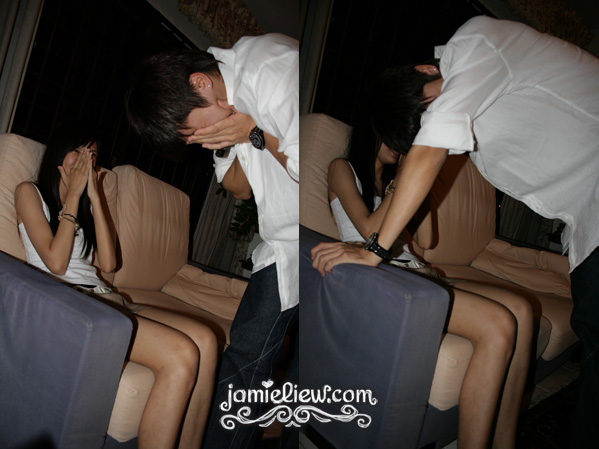 Sandra and Alex. they’ve met before when we all went to Genting and well, this is what I call fate HAHAHA. Jon asked Alex to perform lap dance on her but they spent 10 minutes laughing non stop (okay I exaggerated) so he gave an EASIER task. which is just a simple kiss on the cheek, where…. they took quite long to do it too. NOT SPORTING LAH! xD. 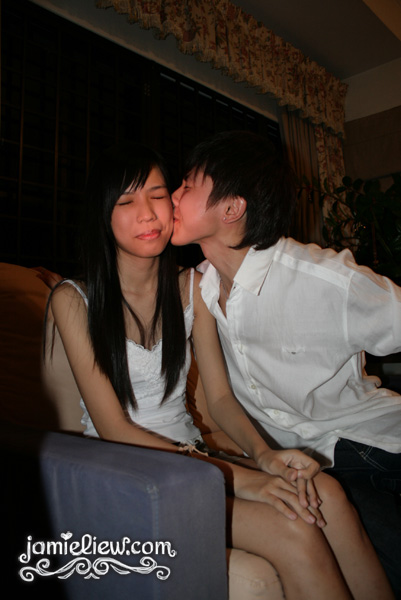 so this is their very awkward kiss xD! AWWWWW, how sweet right? =3. 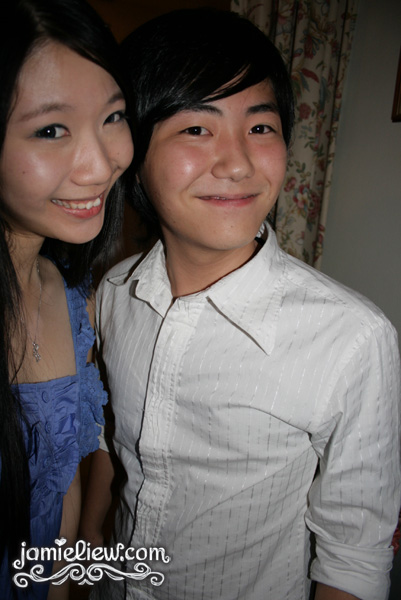 this is Sho Suzuki. it is his name! he came for… 10 minutes. more or less like that because he rushed to the airport later also to send his host mother home to Japan. and yes, he is HALF japanese where he kind of put the stone look on my face when he first introduced himself to me. hahaha. 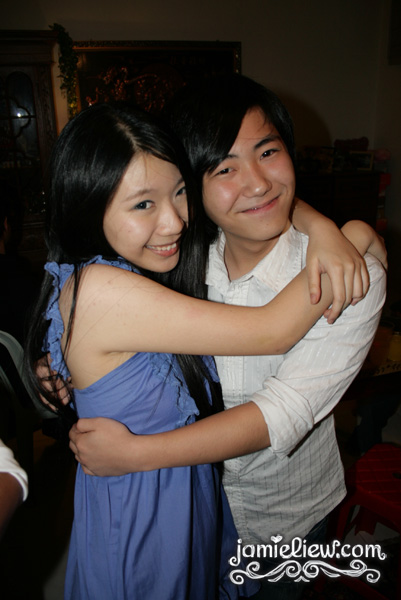 but anyway he’s another lovely sweetheart where anybody could just get along with him easily =D. we got married on the first of april for er, around 24 hours? uh huh. =D! (in FACEBOOK!) and a few actually fell for that trap it so so funny it made me laugh the whole day xD! well that’s one trick okay don’t take it seriously HAHAHA. 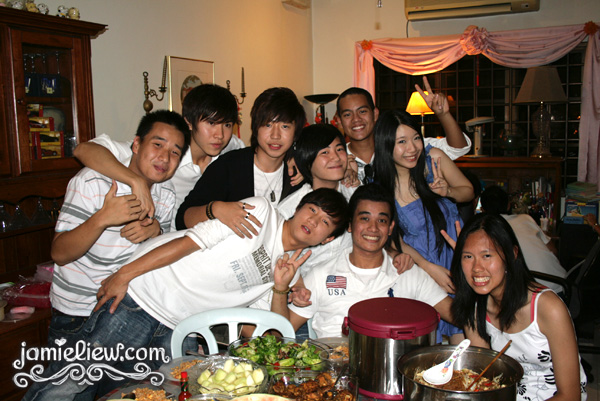 we totally looked like we had fun no? xD. and of course, we did! 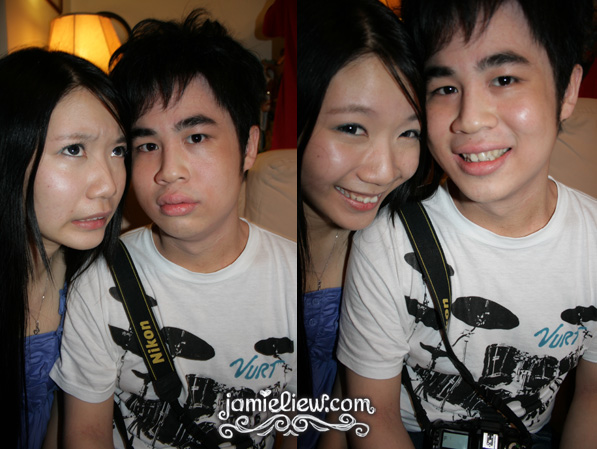 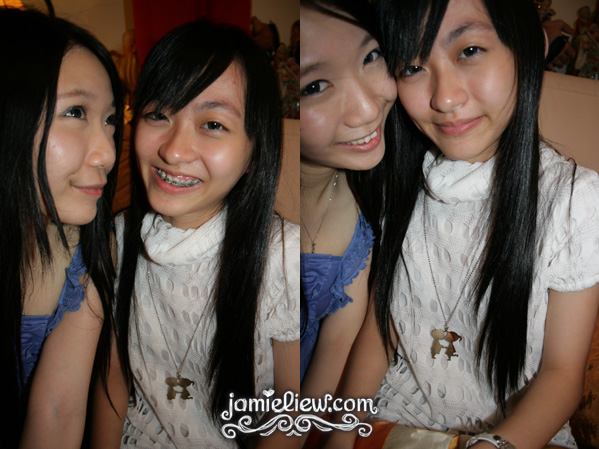 Hua Min. she’s seriously like the cutest girl I’ve ever met. you should really listen to her when she talk, her voice is very soft and the way she present herself is very polite and adorable where you’ll totally melt. if she wants something, I have no doubt that she’ll get it. her bambi eyes will work for just ANYBODY! 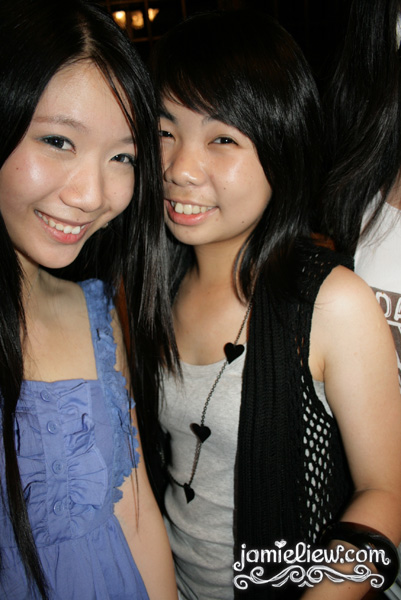 CARMEN AU YITING is my another best friend, AND SHE DIDN’T WEAR WHITE! how can! I am closer to her than anybody else and she didn’t wear white! okay maybe her pants is white so I’ll let her get away with it. hahahaha xD 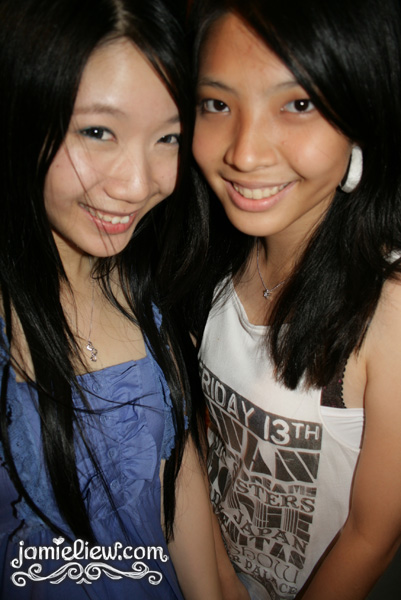 another picture with future Ms Malaysia =D. (if she join). thanks for coming Michelle! hope you had fun eventhough you came for only a short while! =D! I so like her smile it is very nice =3. and now I am even more provoked to get braces! UGH! 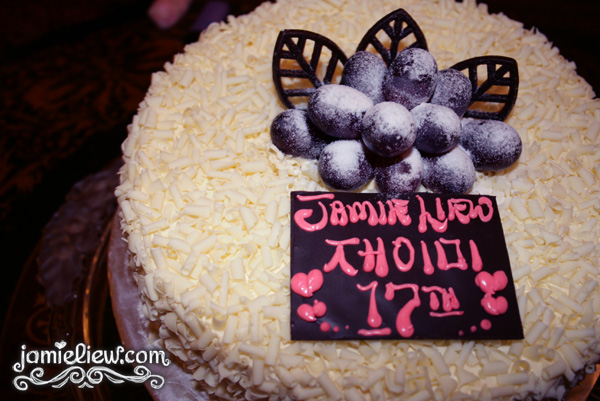 my White Chocolate Cake to match with my pretty white theme and the korean words to show my Korean Addiction =3.

ps : more different angles, especially when I got a little drunk (OH NO!).

and i hope those -angles- are good *sagely nod*

ooh i love ur cake 😛