you can skip my story and look at the pictures first. =D.

so this is what happened. I was all down and moody because I thought that by the time I reach David Archuleta will probably be on his way back to his hotel. without losing hope I begged my mom to get me there thinking that I will still have a tiny light of hope into bumping into him in the shopping mall (which is quite impossible. his fans will all be around there trying to stalk him and if I were him I would hide inside my suite). but she didn’t want to fetch me too. =/. because my aunt is going to be at my house later.

10 minutes before I leave for tuition, BALDWIN suddenly messaged me and said if he could cheer me up by bringing me to Sunway since he is going over to that area later (and it is not ON THE WAY). really kind of him. without him I would probably spend my WHOLE DAY sulking. googling for the videos later. I left my tuition centre 5minutes earlier and then rushed all the way to Sunway hoping that I will not miss anything.

and that wasn’t the climax. I went all the way there, and when I am almost reaching I noticed that I don’t have a.. ticket? so I quickly called Vivian to check if she could get me one but the thing is, she couldn’t find any. with my panicking situation, I recalled that my sister’s friend left me a comment on my cbox telling me she have extra tickets right before I leave for tuition. and it was already near 4pm. I called my sister whom is still in China to get her number but SHE DO NOT HAVE IT! so I made her get it for me and after waiting for 10minutes she still didn’t call me back. so I called all my sister’s unimates (ok, 1 only actually T_T) but nothing worked. I called my sister again and YES I GOT IT <3.

AND, when I called her she said something like “maybe they won’t check try and come in” but the guards stopped me. and because the theater and the gate is SO FAR AWAY and it was raining cats and dogs I waited for some while until that kind uncle was like ” ok just let her go in ” looking at my cold high heeled feet. and yes, I got in without showing them my ticket =P.

but overall the best thing is that my sister’s friend, Yen Li got VIP TICKETSSSSSSSSSSSSSSSSS! so I am standing right in front xD. and thus those cun and chio pictures ^^. 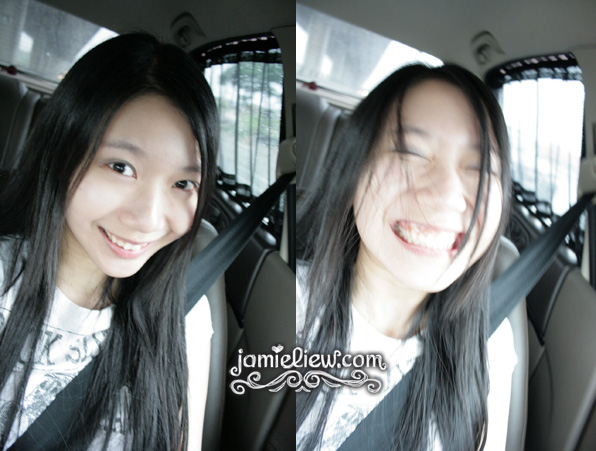 showing you my happiness >=D! 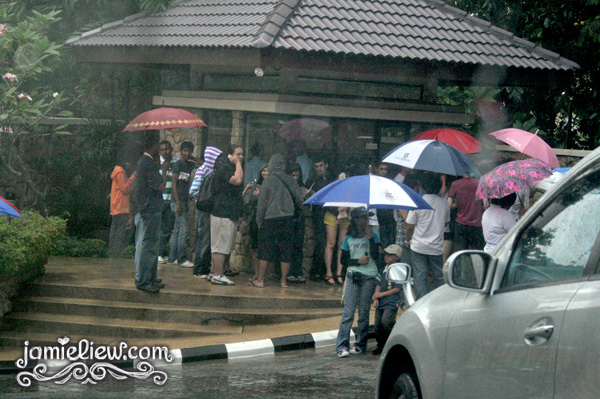 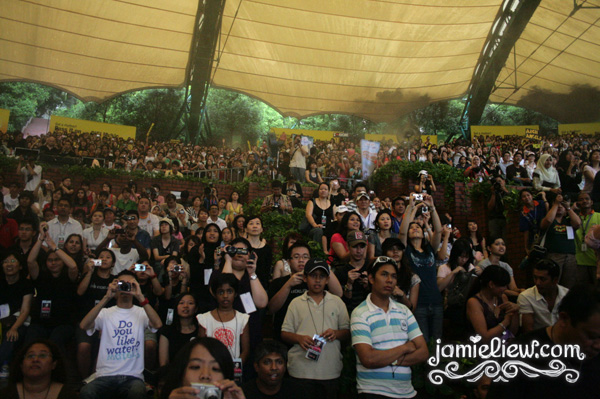 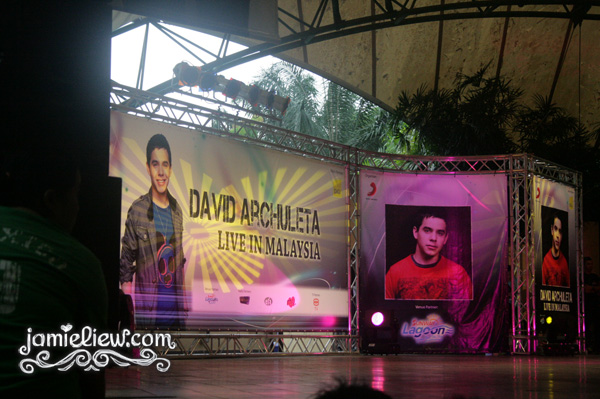 the stage is alright but the only problem is that there isn’t any big screen. so.. poor people sitting behind, all they could see is a small figure with a brilliant voice =/. 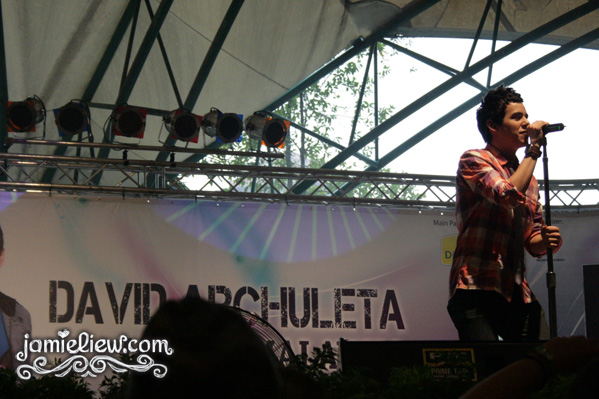 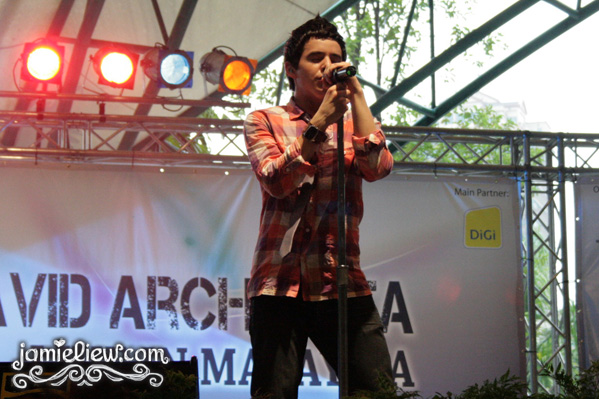 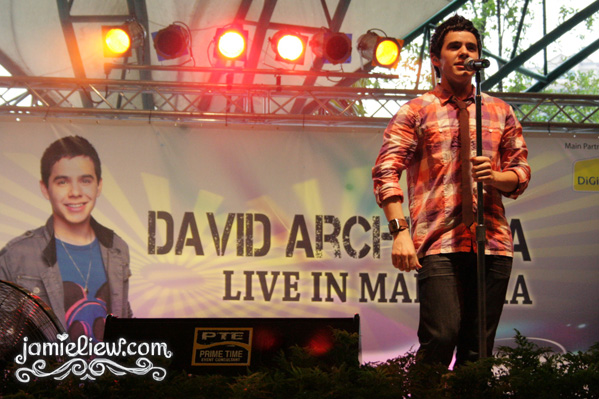 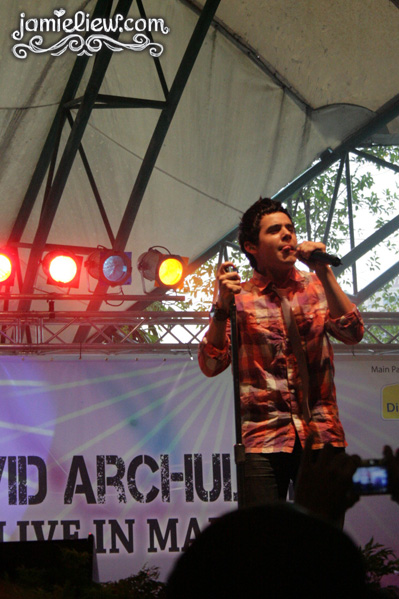 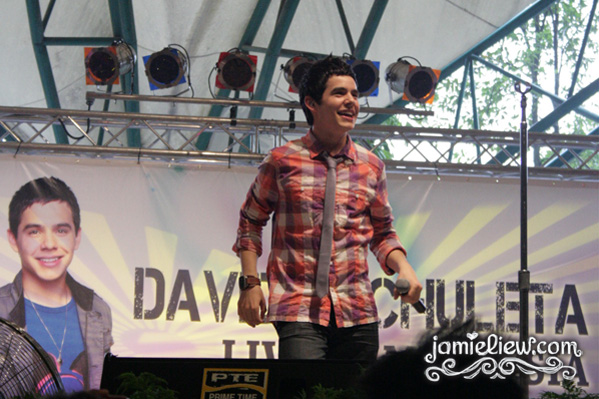 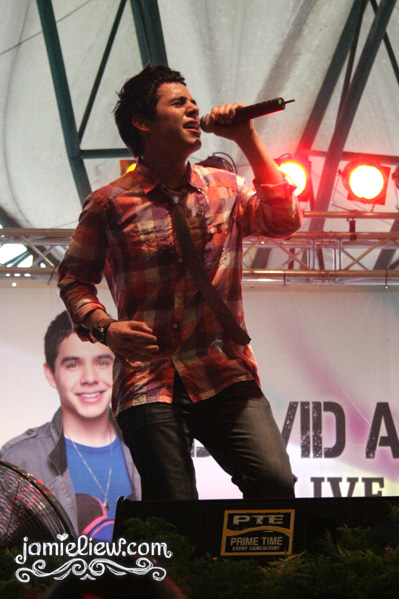 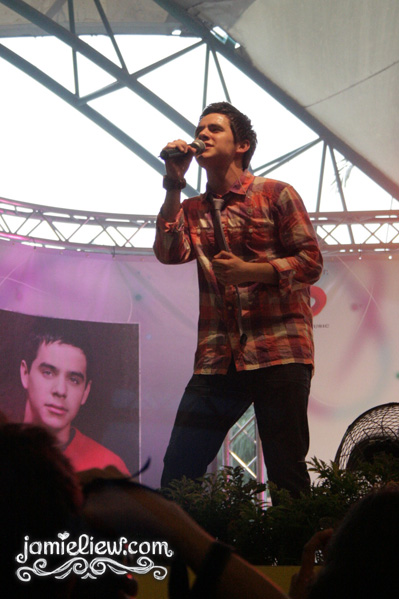 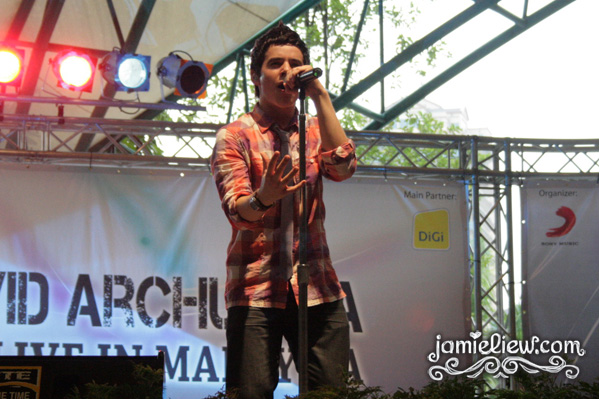 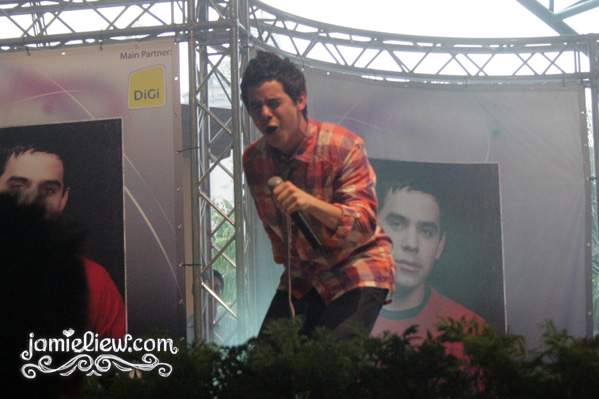 at one point I think he look a little in pain. or constipated. or er, at his best. 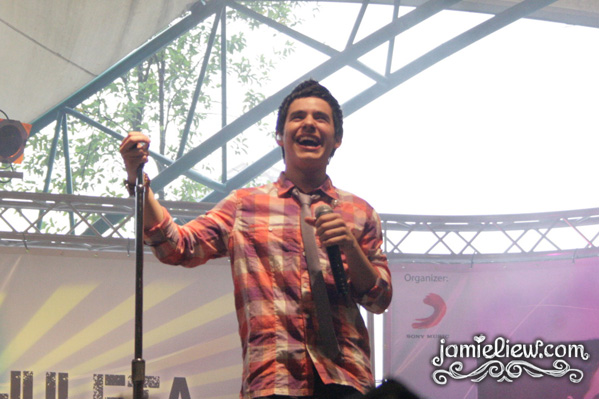 I so love guys who smile like that and Malaysia do not produce such smiles =(. I shall join some singing competition (and become the next William Hung) and get famous so I can get to know him and then, MARRY HIM! <3. Jamie dream a lot. 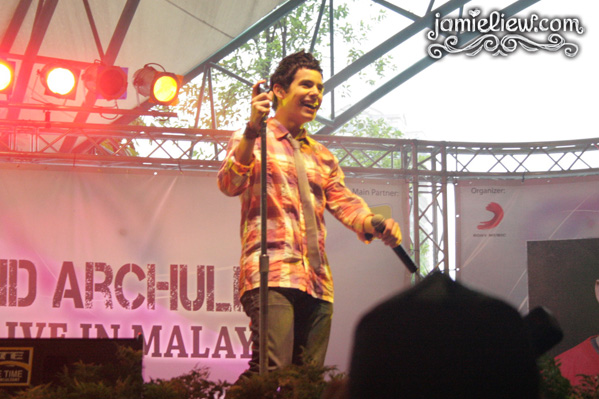 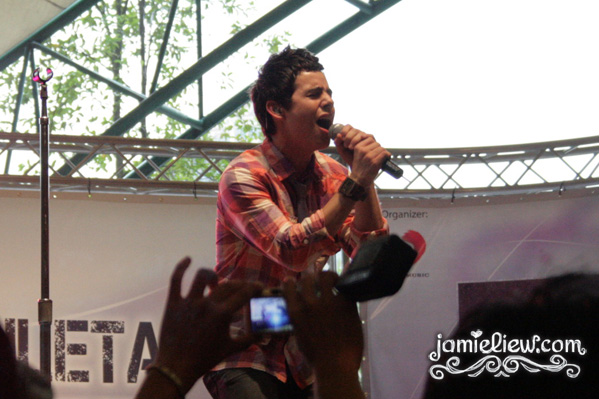 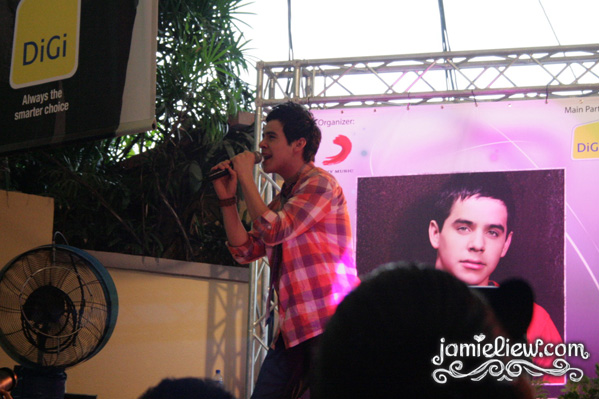 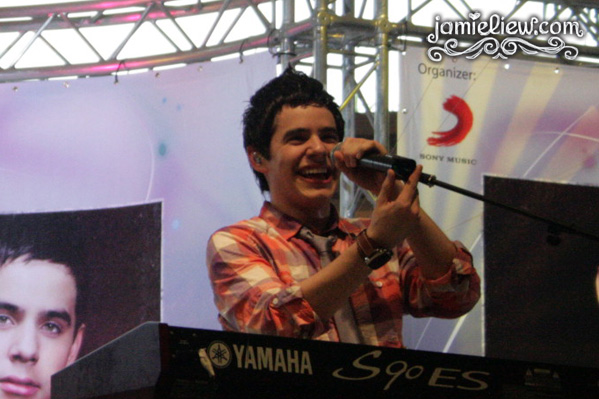 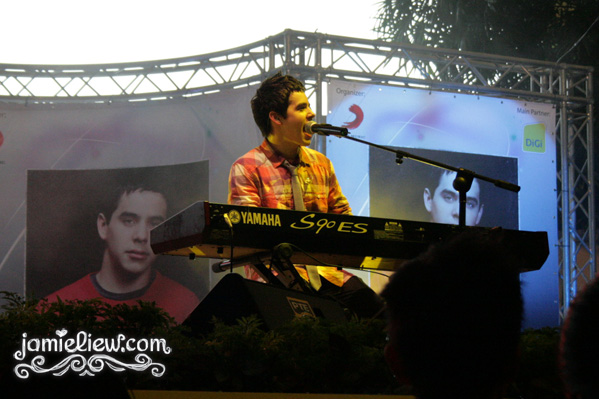 this is how he would look like if he were to eat ice cream in one bite!

I TOOK A PICTURE WITH HIM TOO! 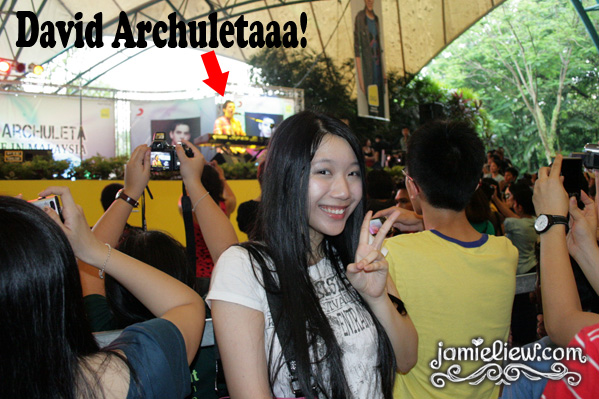 okay la it is not that bad right =/. not as lucky as Yen Li who even got to hug him I went home early sigh..

BUT AT LEAST I CAMWHORED WITH HIM. 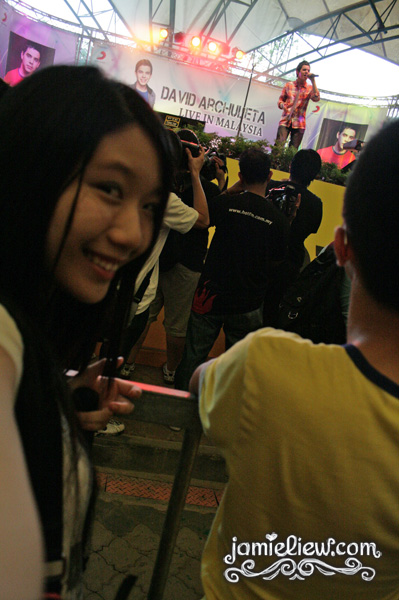 this one better <3. I’d rather to focus on him ahhahaha. (I hear you saying : OF COURSE.) 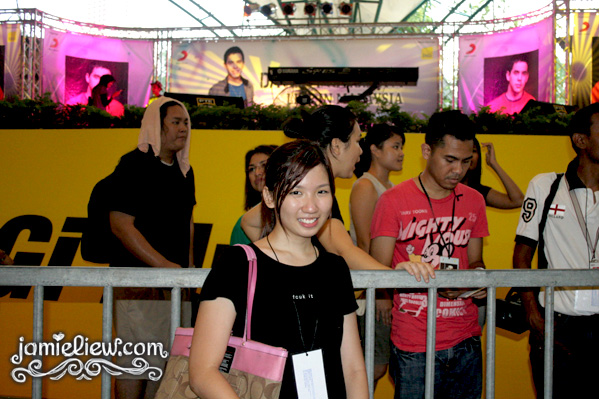 YEN LI! THANK YOU SO MUCH. without you I will probably be sulking outside the gate ahhaha. xD.

and later on Baldwin took me to the place he is planning to go to, which is his church (no he didn’t join me for Archie =(. I know he loves him tooooo.) to watch the Easter Drama. and this is the first time ever I’ve seen a church not in those church-like buildings! I initially thought they rented a stage or something. but YES it is a church. but probably not those where you would want to get married in. but STILL, it is damn cool. no old wooden chairs and all xD.

and guess who acted in the EASTER DRAMA?! 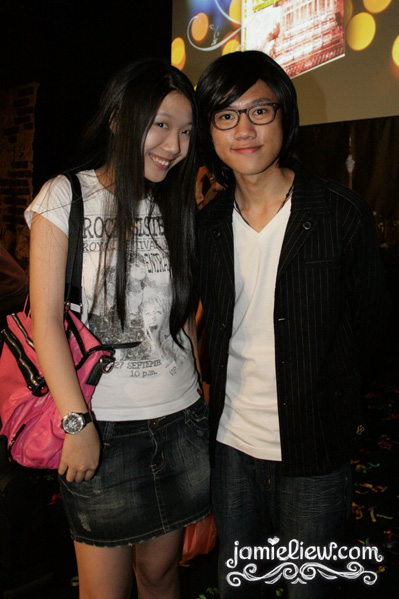 the guy who sang the song “Dui Shou” in collaboration with Tank, Anthony Chang! I so love that song until I put it as my default song for a few months. but I thought it would be annoying to have a song automatically playing when you are enjoying the radio =D. but it is really nice. click here! 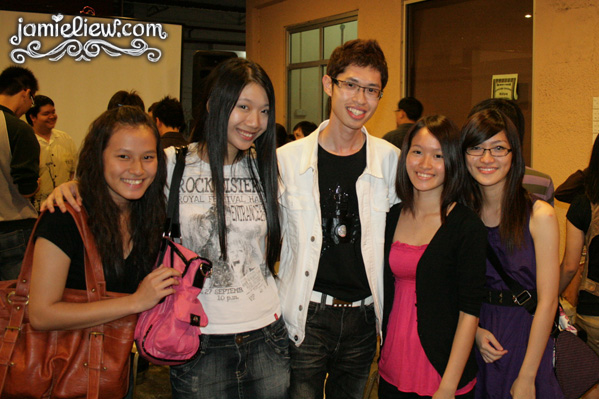 Baldwin in the middle!! and his other 3 GIRLFRIENDS =P. the world is really small the two girls on the right knows my penpal from Kota Bharu! school mates even. @@! 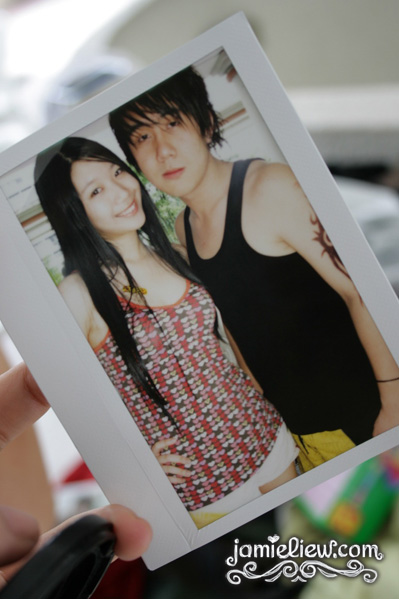 everybody loves POLAROID. don’t you agree?

enjoyed your party really! ^^. will blog about it later on!

psst! I haven finish my Music Bash post either! T_T. David Archuleta is more important in any way =D. 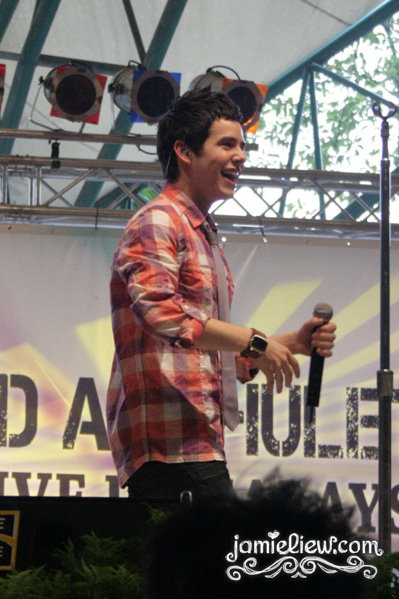 the last picture for you to drool at. =D. this picture is my favourite-est (because the first is favourite hahaha, I always create weird words so never learn english from me okay =X.)

Lol. Congrats Jamie tat u get to meet ur idol 😉

congrats Jamie..well,David is a cool gurl..

juz stay be one of his fan…what I know bout him,he like to sing for his fan…and he good in cooking..juz when he hungry n when his lovely girlfriend start to say..i’m hungry…hehe..juz u and me know bout this secret…hehe..

i can say that David Archuleta has some great potential. all he need is more epxerience ;–