I’ve always thought that food in any restaurant rock in HK, but it kinda seem like I was wrong, SOMETIMES in the “popular places” their food will be less tasty, especially if there are no advertisements of them in newspapers or whatsoever. and which will be the better place? of course, the one packed with locals. even sometimes its interior is not so great, but the food are……………. super.  and just like how I bumped into this restaurant, it’s in Sai Yee Kai if I’m not mistaken. well, this one is a good example of how to see if it’s good ( usually the ones like these are guarunteed delicious. but there are fakes also I heard ). 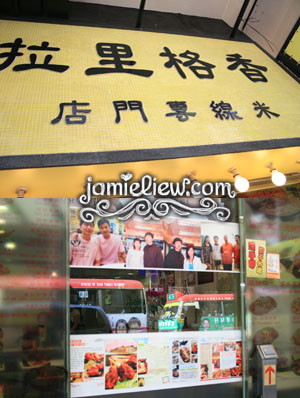 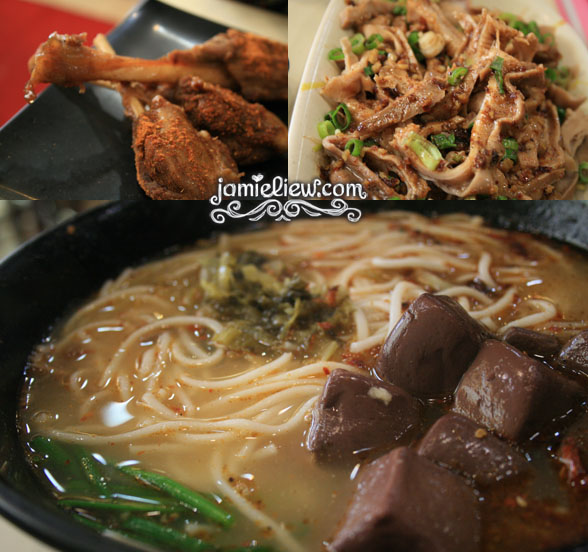 and no doubt the food is good. and did anybody tell you that the pig’s blood in HK are the best? it’s always fresh and smooth. very very yummy. 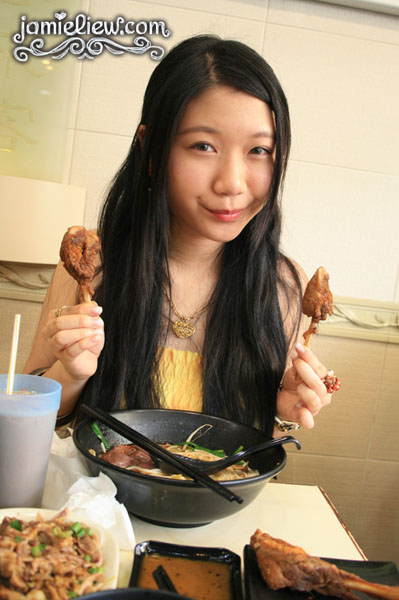 who wants to get good bargains?! 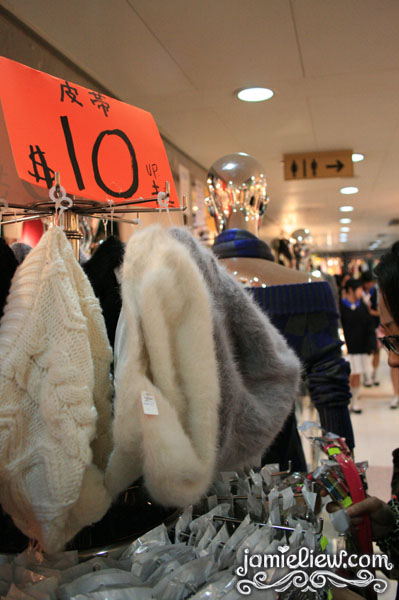 in most places in HK, they usually sell overpriced stuff, expensive this and that. especially in places like Causeway Bay and Ladies Market, but just nearby, you will see the packed shops usually on the second floor onwards which sell stuff that’s cheap, pretty and trendy. I say that because I saw the same scarf which is 99 bucks in Ladies Market selling for only 30 bucks in this place. 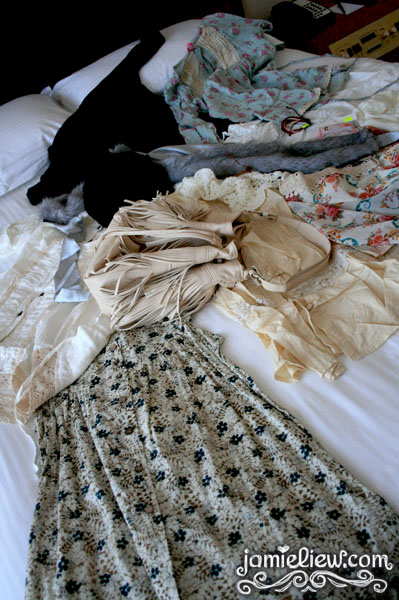 forgotten to take a picture of the shops (too busy shopping =P). so here are the stuffs I bought. =3. will be seeing it later on when I wear it. hahaaa. it’s all below 100! THIS IS JUST A SMALL PART OF WHAT I’VE BOUGHT. >=D.

so where did I buy it? 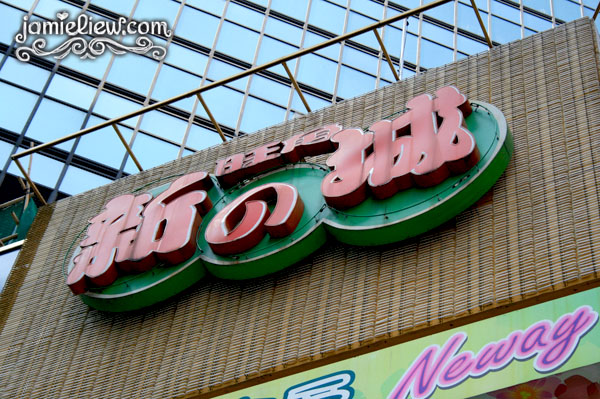 I don’t know how to read chinese T_T, so recognize it from the picture okay. but it’s easy to find as it is outside the Mong Kok MTR station Exit… er, just follow the sign Argyle Street and then there are exit 1 and 2, I don’t remember which one, but turn to the one on your right. =D. 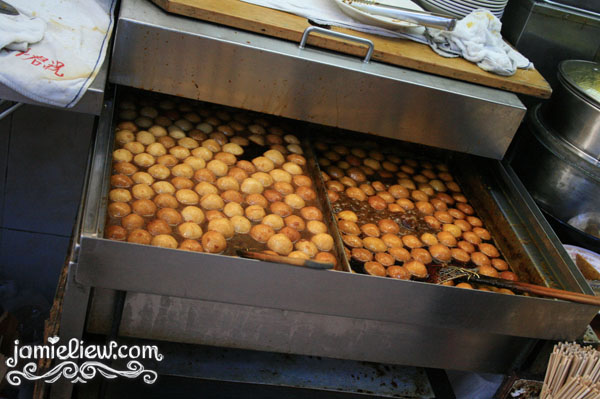 I overheard some students saying ” the curry fish ball here are the best! ” and so I headed to it, and ordered a stick. and yes, it IS the best, so far. no other curry fish ball is better than this one =P. its at Yau Ma Tei exit at Pitt Street and Pitt Street right or left? RIGHT! right outside the MTR station also hahahaha. 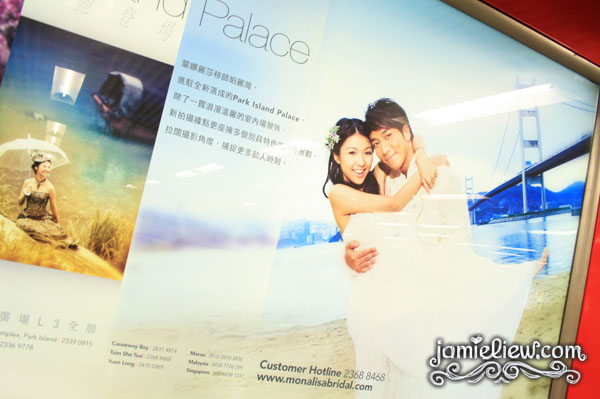 it is never boring being alone in the MTR stations because………. cute guy posters are everywhere @@. I do NOT fancy Ron Ng =D. actually, hot guys and pretty girls ARE everywhere in HK. 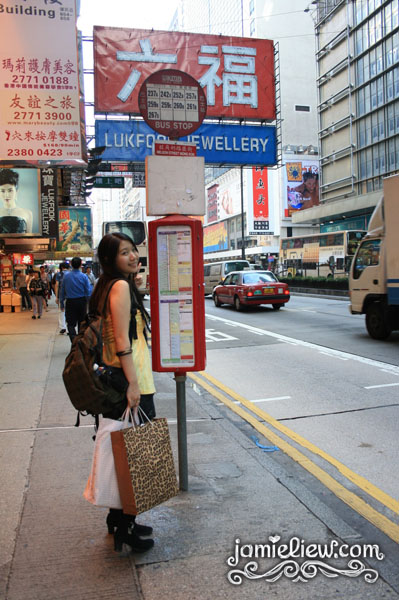 and so IF you are really fed up with MTR. try taking the buses! lots to see! =D. and trust me, taxi’s are totally not worth it. don’t take it if there are other options. 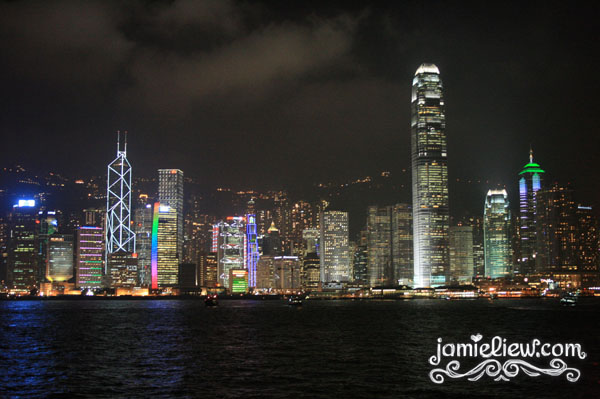 NEVER say that you went to HK if you’ve not visited the Harbour. because it is the most beautiful thing. and try not miss out the Symphony of Lights at 8pm daily! but missing it is alright. =X.

whats more to see in the Harbour?

well, there is the Avenue of Stars, where there are quite some stuff to do see there. 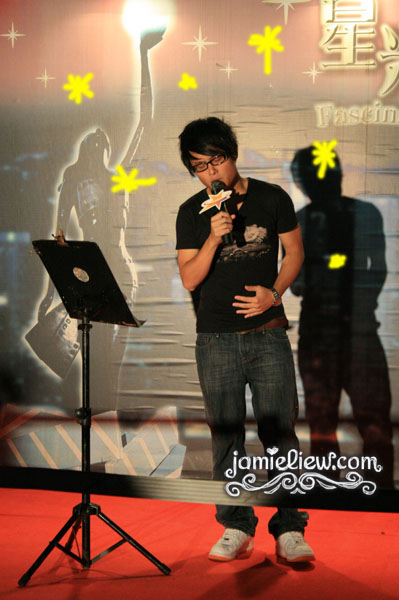 something called “fascinating performance” or something @@ which is so-so. but at least something to SEE right? =D. 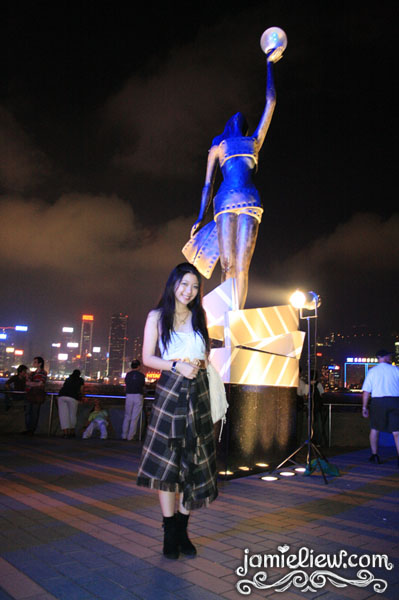 rather than Statue of Liberty in NY, there is a.. Statue of Stars? in HK! =D =D. 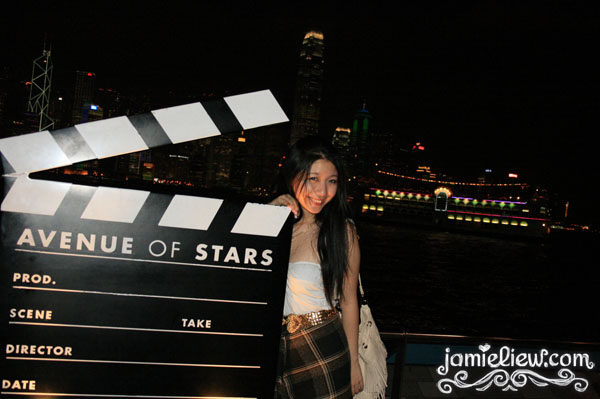 loads of THINGS to camho with. =D. there are more, but I am not showing~. hehe.

and my favourite =D! 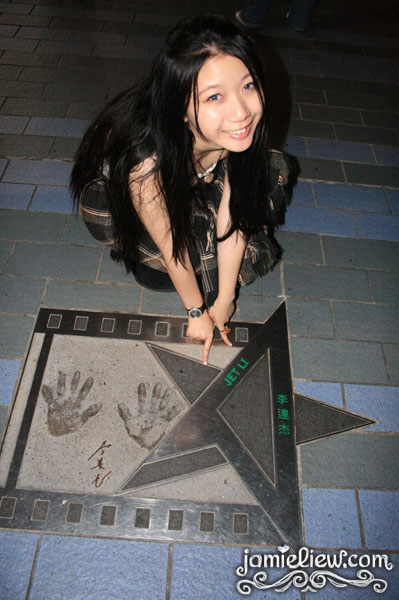 camho with “stars”! their hand prints =X. good exercise too, as you will have to squat down and TOUCH the not so dirty floor. and you will have the urge to do it with every star you like. hahahhahaha. it’s just weird, why must they do it on the floor ><“.

and when I say every star, I mean EVERY STAR! 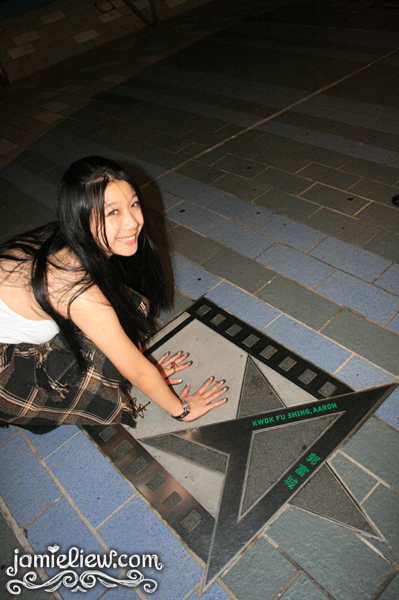 the ever so famous and HANDSOME (it seems like he never gets old) Aaron Kwok <3. he’s FINALLY married. can you imagine, he is like around 3o years older, and still, so famous among the youngsters my age? o.0. 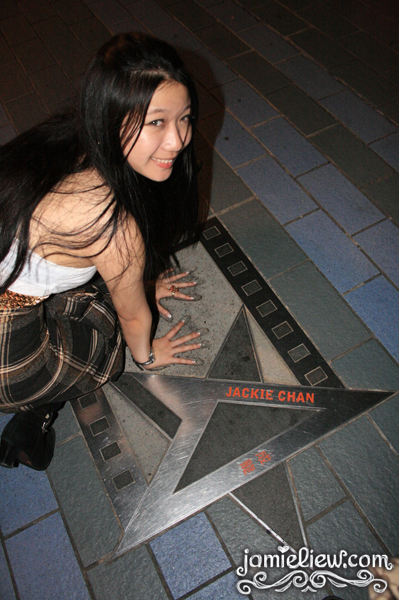 I’ve always thought it’s Jacky Chan, not Jackie Chan. I just realized this TODAY! when you go to the west, you tell them, “hi! I am from Malaysia!” that english guy will go “sorry? where is Malaysia?” but if you ask them, “do you know who is Jackie Chan?” they will say “YES! of course I do!” he is more popular than a country my goodness. *I’ve experienced this while talking to an english online*. =((. 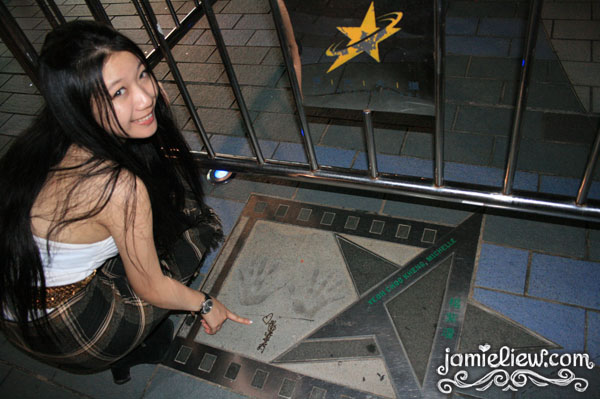 Datuk Michelle Yeoh truly brought pride to Malaysians. =P. in fact, she is like the only? Malaysian that made it to the big screens. why Malaysia so big but so little people made it into the big screen but Hong Kong so tiny and so MANY made it.*shakes head*. Malaysian actors gotta work hard! =D. 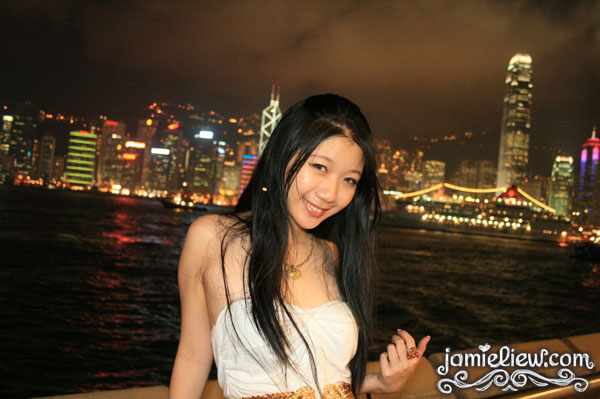 then, you can camho with the view while star cruise is passing by. =D. 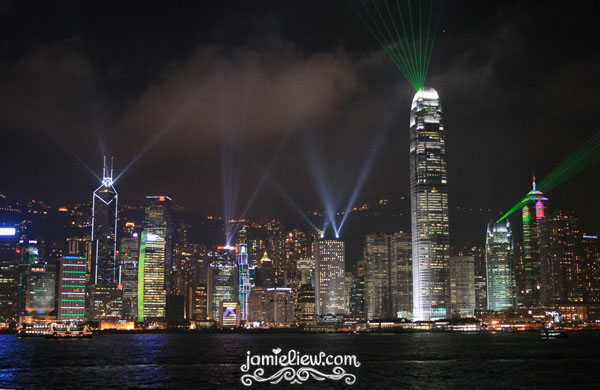 so this is the fascinating Symphony of Lights which is, to me, not something compulsory to see if you’re in HK for only 2 days or so. (egg tarts is a must eat!!! wuahahaha). 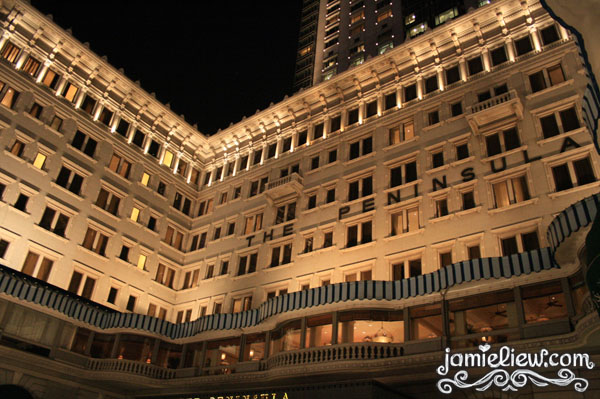 the most expensive oldest hotel in Hong Kong. facing the super great view in front. if only I get to stay there for a night =P. <3. 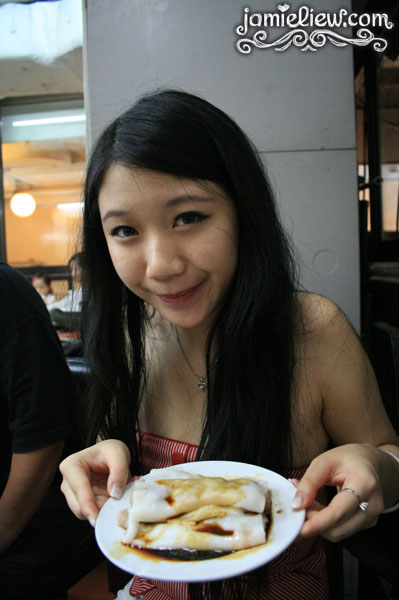 next, Dim Sum anyone?

Where did you buy the skirt? It’s gorgeous!

Lynn, ahh thanks! my cousin bought it for me from er, London/Europe, I am not really sure, at first I didn’t know what to do to it because it was so…small. and my teenie weenie little brain created this with mixing it up with other stuff. =D.

Lisa, why your name got a dash one? @@”. okay anyway, it isn’t a dress, its a skirt and top =D and.. belt. top from myself, the belt is from my mom, practically older than me, skirt from cousin. =X. Jet Li has small hands *stares*. strong, small, hands.

stumbled upon your blog by coincidence. i went to hong kong three times this year alone and looking back at all your pictures makes me miss hong kong so much more! i’m glad you like hong kong as much as i do. do check out my take in my blog address, it shouldn’t be too much trouble looking for it 🙂

THREE TIMES? oh my, I am very jealous of you. I am missing hong kong from the second I step into the plane. T_T. I just WANT to live there. nice blog by the way! =D. you take care too ^^.

yea, nice place, people, weather, food, sight seeing, all in one place. the only problem is their typhoons o_o have you experienced it? btw added you on fb 🙂