I don’t quite have an idea about what was this Junior Idol about until one day my grandma was watching TVB8 and suddenly I saw my friend in the advertisement, and yes, only the advertisement which encourages people to join. and imo, contests are really a waste of time towards most people, because in Malaysia, MANY MANY MANY of these kiamsiap contests depends on voting. and also, if you don’t get first, you get nothing. isn’t it sad? eg you are a whole lot better, but you didn’t win because you only spent 20k on voting and your “friend” spend 30k on voting for themself. you invested so much money and time and get nothing. but that’s unless you are full of potential, because even if you don’t win, those powerful ones who have been eyeing on you would call you up, give you a job, and tadah! millionaire! =D. and the best thing is, I don’t think that thing thing depend on votes that much. or does it? @@”? 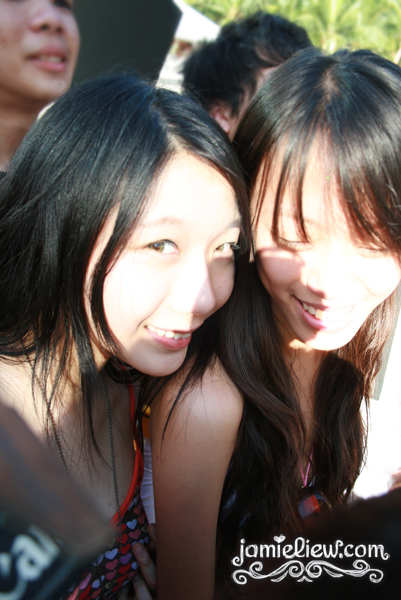 I like this picture. haha. maybe because my skin looks fairer here. ^^v. goodness, I am darker after this event. pfft. >=(. 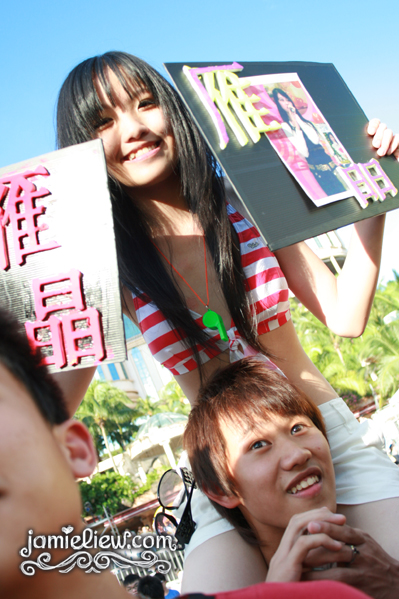 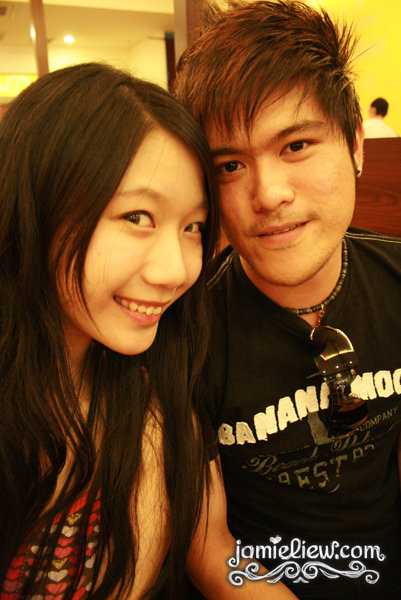 and also before all that, we were at Bar B Que plaza for lunch, and guess what, today is… yup today exactly, 9th of September, it is… SIMON’S BIRTHDAY! SO HAPPY BIRTHDAY SIMON SO MO DEL ISH! I’m sure it’s the hair! it must be the hair! *joking*

so back to the main topic, 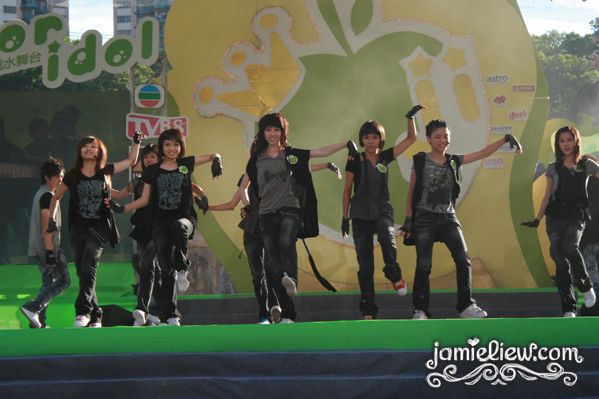 the contestants, they are all 18 and below! that’s why it’s called JUNIOR anyway, I wonder when Kids Idol will come out. haha. 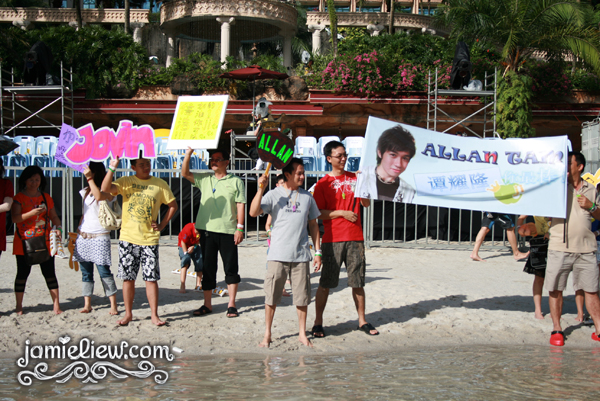 the supporters, very very supportive, Allan’s banner was up the whole while for 5 hours if I’m not mistaken (at least every time I turn my back I can see his banner holding up high behind), and also many contestants had their banner home made which I think is really creative and thoughtful. but I was just wondering, where are they going to keep the huge banners after this competition? =X. 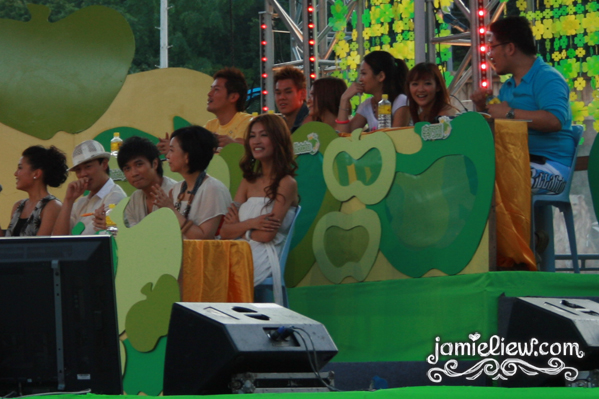 and the Judges, LEO KU AND RAYMOND LAM IS LOOKING AT MY CAMERAAAAAA (at least I think so. =P. I ZOOMED in already.=D=D.) 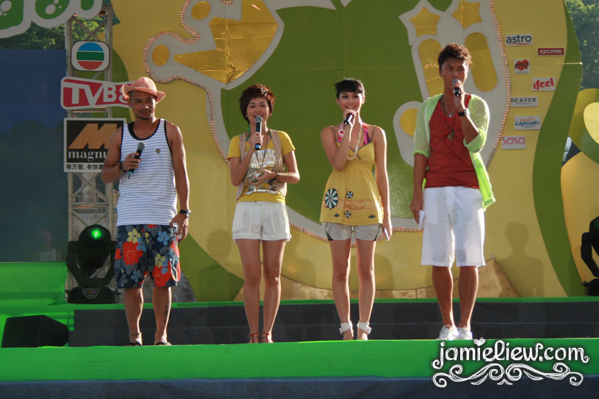 and…… the hosts, many people says that my sister look like Vivian Yeo. do you think so? hmmm, to me, a little, but Vivian is so much taller @@. 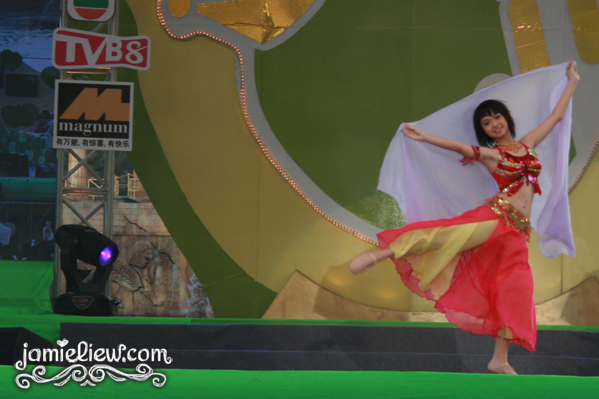 and a girl who is really really sweet looking, also, I caught this pose on camera =O. 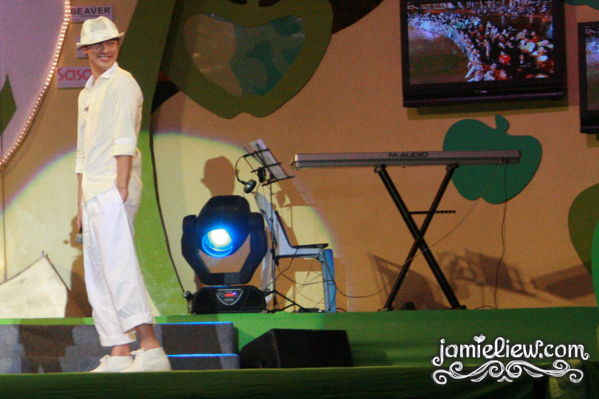 his smile really makes a girl melt <3. but he was being quite stuck up that day. his fans was like shouting his name for so long, and very obviously wanted him to look at them and smile, just like the other superstars do, but he kind of ignored them and acted cool. and his fans was actually quite pissed. hahaha. 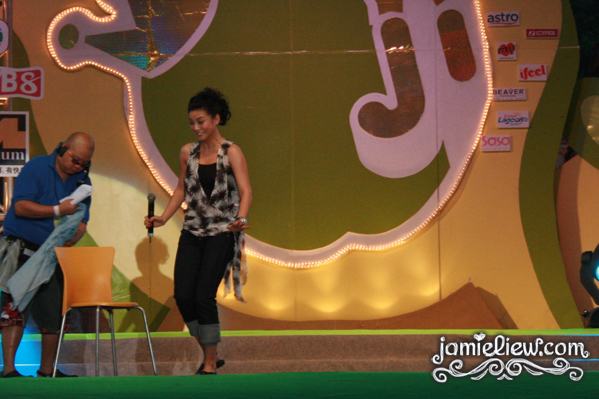 and well, as for Bernice Liu, she’s really really friendly to her crowd of fans, I always loved her ^.^ but I thought that she would look better with a white shorts and also if she let down her hair. =D. 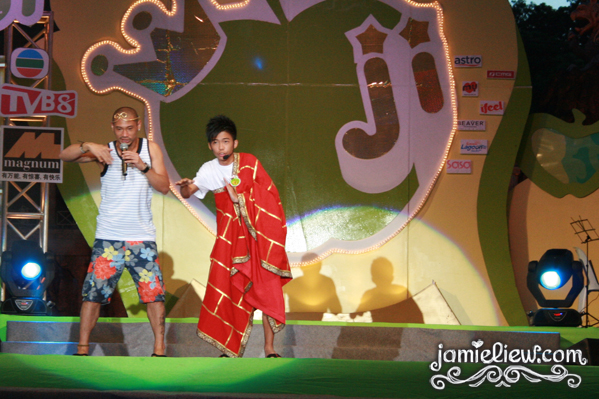 and a contestant which I really really like, he is like a pro beatboxer, though still not expert, but I thought that he is really really creative. and this was some kind of acting session where the other guy acted as the Monkey God and him as the Priest. xD. and his way of saying his “prayers” is by beatboxing, haha, really cute. 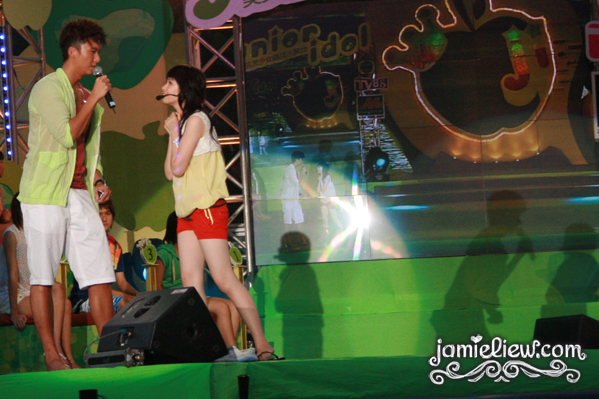 and Angeline! she did great really, and also I find her most photogenic in this competition too, well, she’s already a singer. =P. 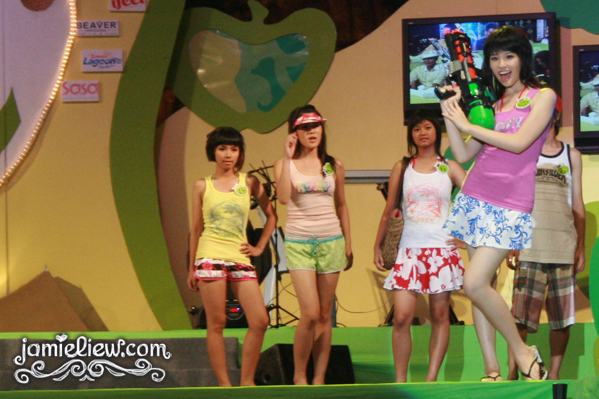 the judges commented that she is like the younger version of Jolin Tsai, and not only them, everybody thinks so too. =D. really alike right?! 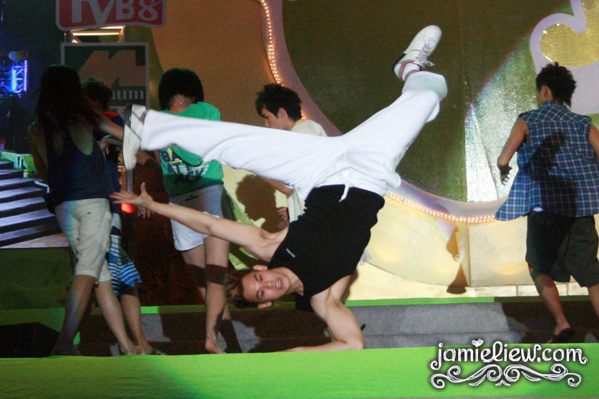 and here’s Fellest, been seeing him around in many competitions, a dance expert, the Malaysian version of Wade Robson imo. his stunts are really really really cool. admirable person. =D. 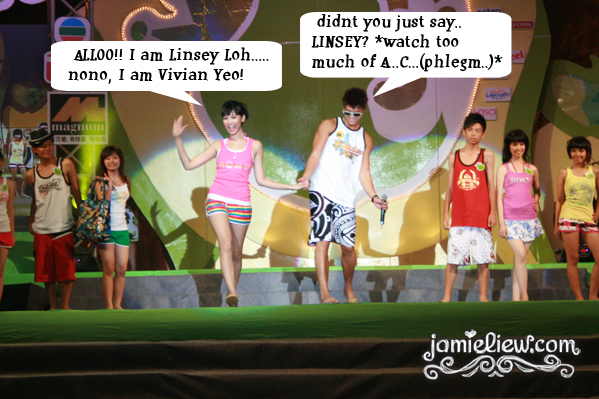 if you don’t understand? go to www.youtube.com and key in “the dead terrorist”, it’s really funny! nothing scary at all xD. 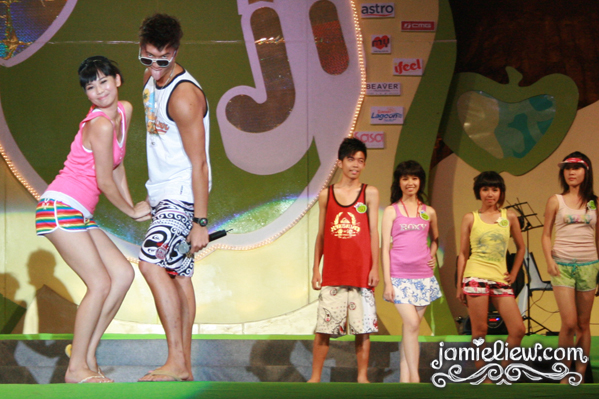 okay, in this picture, my sis DO look like her. haha. 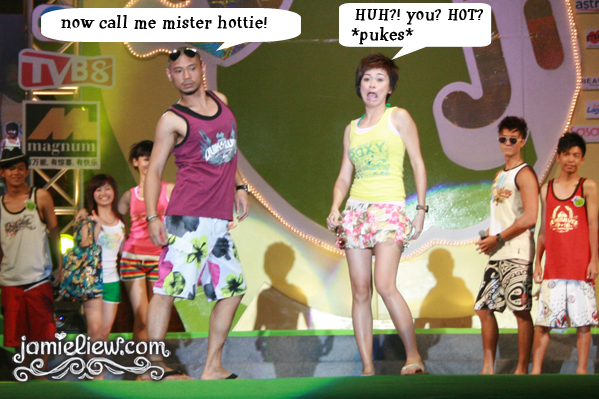 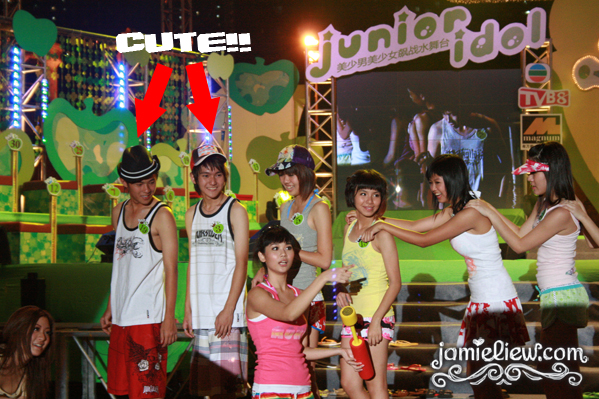 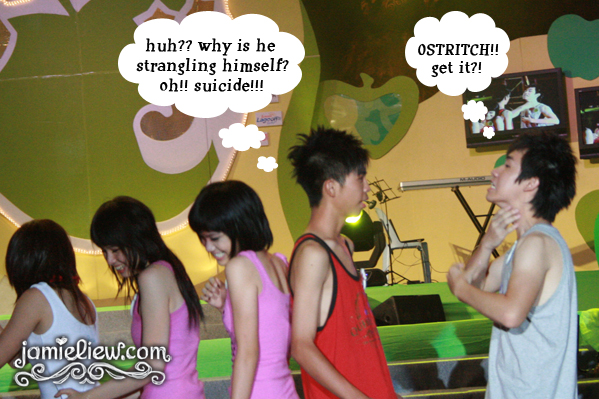 and they were playing some kind of famous Hong Kong reality show game, which you gotta pass the message on by describing that “thing”. and to my surprise, they got it correctly! and no, they did not cheat! =P. 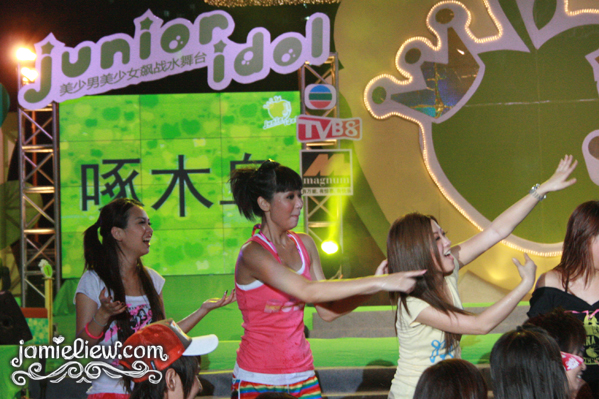 and when it’s the celebrities turn, they lost. ahhaha.

juz pass by xD
i was there too
the beatboxer, jeffrey is my classmate..hehe
oh ya, i support angelin too !
she really looks like my idol Jolin la..pretty gal
the top 2 in my heart should be them..
but the results…omg =.=

u look so pweeeeetttttty in this pic with ur sister!

haha, i support jeffery and angeline too… Angeline really looks lyk JOLIN！！MY IDOL leh…
and, jeffery is really great in his beatbox…