it was actually a day before yesterday, me along with a few bloggers went to dine at Umai-ya, a great Japanese restaurant, and I’m not bluffing, it’s really really good, I’ve never liked tempura, but now I do. hehe. 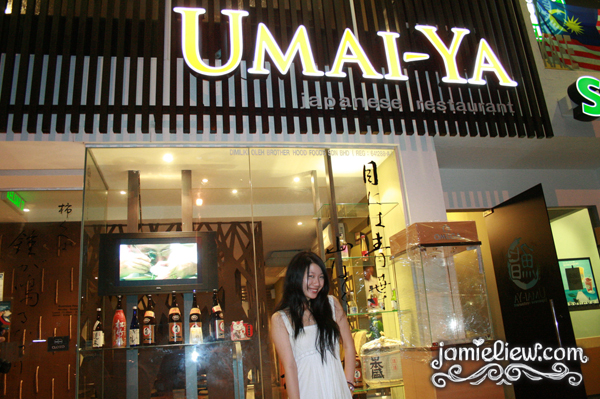 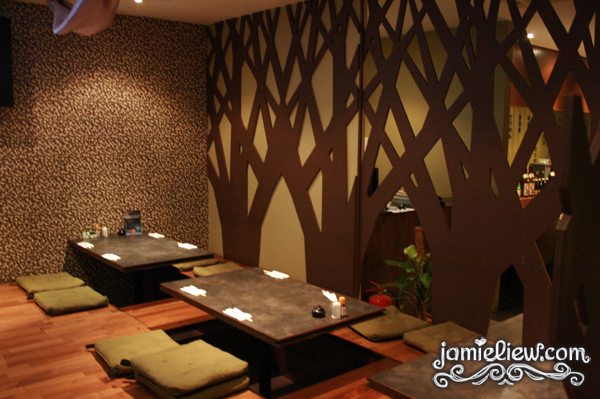 something I really like about this place is, the interior. in my opinion sometimes the interior does give us the good feeling like it’s going to be good and sitting down in a place that looks good makes you feel good too. about the price, I’m really not sure about it, because I forgotten to look at the menu =O. but if I’m not mistaken, it’s more or less like the TGIF pricing? =D=D. 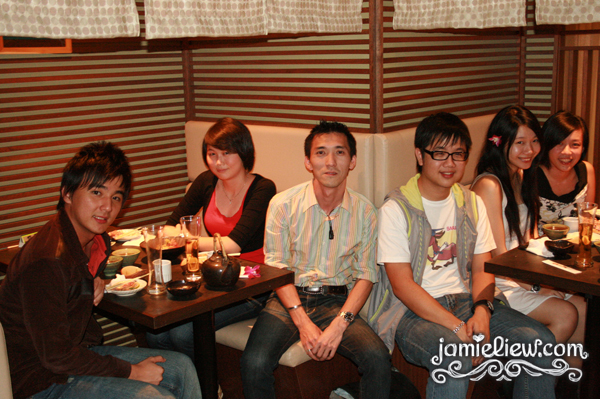 all of us!! eh? the camera-person did not zoom out to fit the others =((. but it’s okay, somebody’s coming to the rescue! 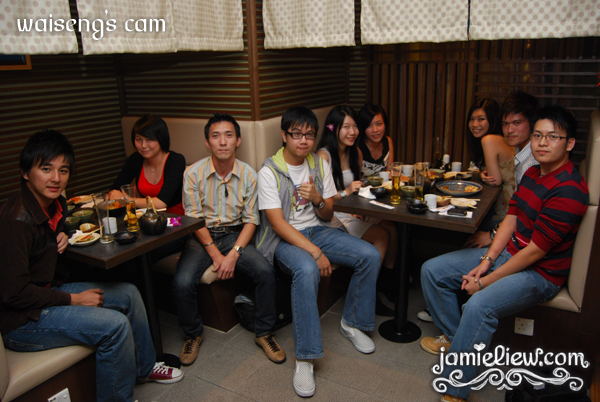 when you see superb quality pictures, it’s quite obvious that it’s from somebody else’s. I WANT A FLASH LIGHT. >=( . okay I’ll fret about this later, so there is Bryan, Yin Tse, KK, Jason, me, Angeline, Jeannie, Simon and Wai Seng. and I actually didn’t really talk face to face to any of them other than Jason. and because all of them are so so so chatty, we all became instant friends =P.

and before the starter even came, we all took out our camera’s and started getting syok. 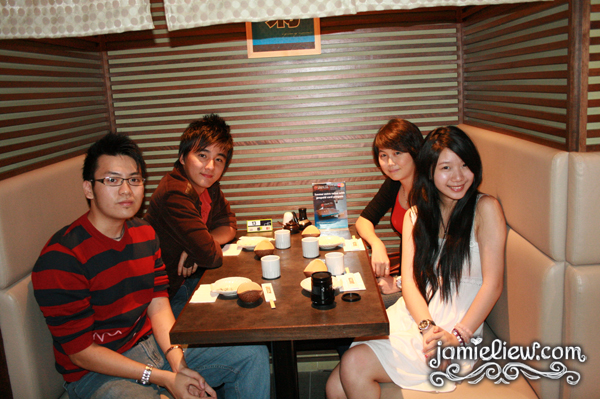 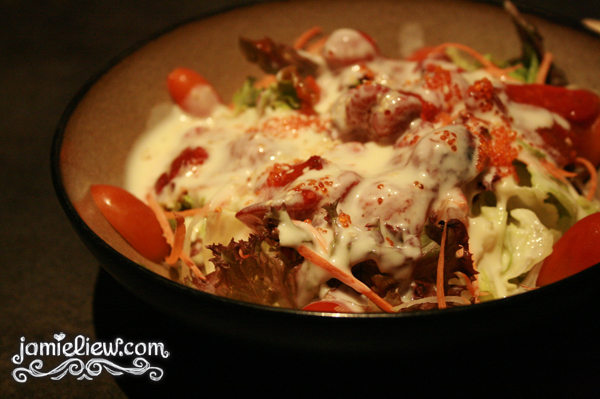 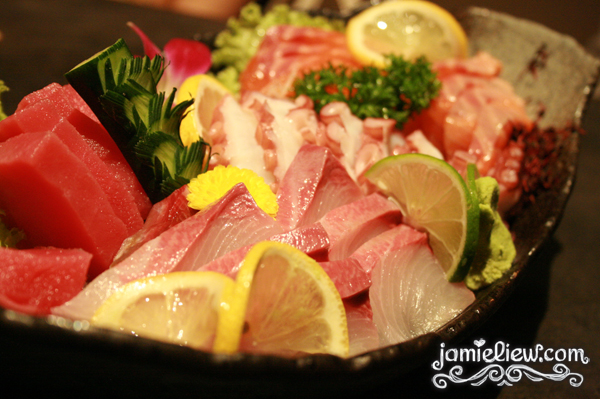 second, we had SASHIMI. very very thick. I seldom find sashimi as thick as this in M’sia. seriously, I think they serve the thickest sashimi’s around! and also, it’s all fresh. =). and oh? did I mention their wasabi is homemade? =D. 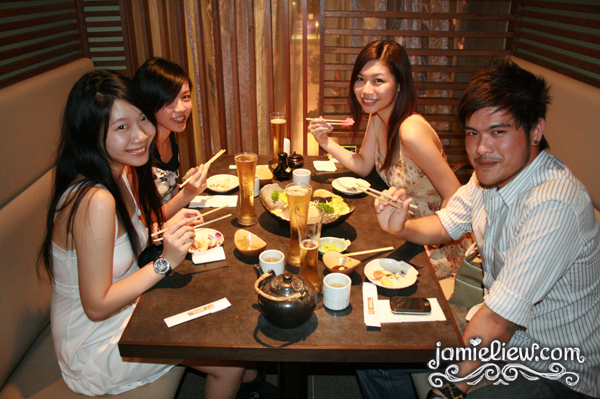 something as a proof that we ate there and also to make you jealous. wuahahaha. 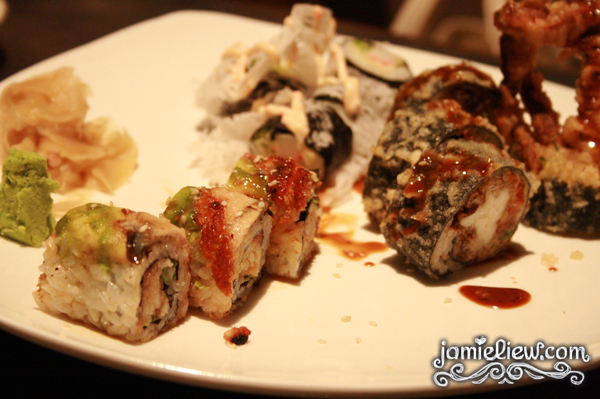 then we have Makimono which consists of Dragon Roll (the one with the avocado!), Skin Roll and Taco Pelt. I LOVE THEIR DRAGON ROLL! it’s a must try. must must must. okay la, I’m very into avocado, it’s delicious mar. <3. not only avocado for the top, but also unagi =D. 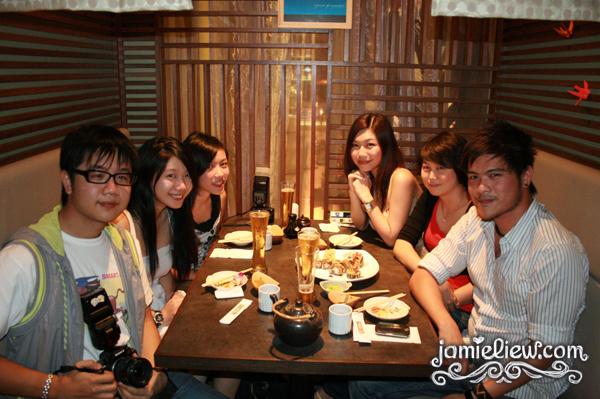 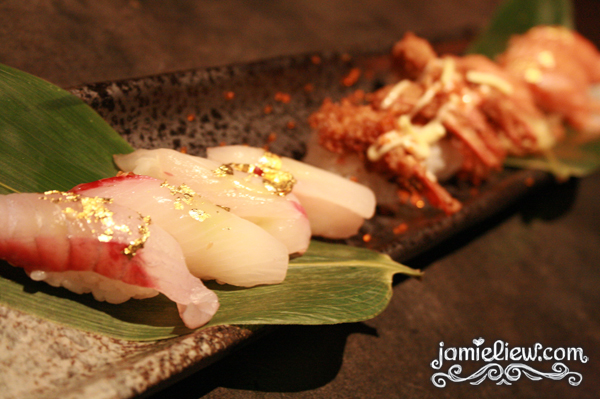 Nigiri Sushi~ they just have to serve it so beautifully. I guess this is the only place where they serve food that looks like the picture, and tastes like how it looks like. *winks*.

INTERRUPTIONS! the models which were modeling for Vmag were having a shoot or something there, and when they were about to go home, the guys approached the female models and snapped some pretty pix. and then I don’t wanna lose and so I asked the male models AWKWARDLY to have a few shots with them felt rather bad for the male models because nobody wanted to take pictures with them. =D. 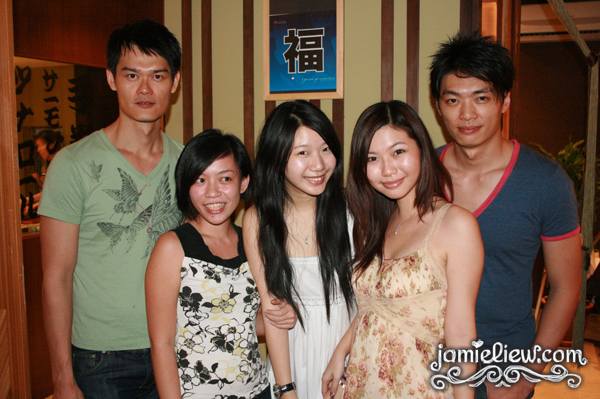 actually there were a picture of them with only me, but because they are so so so tall, they made me look like a complete midget in the picture. so, it’s better to have some others taking pictures with you, so you won’t feel so “small”. Ha! I remembered the guy in green from one of the pictures of Daniel Tan in his site. =P. 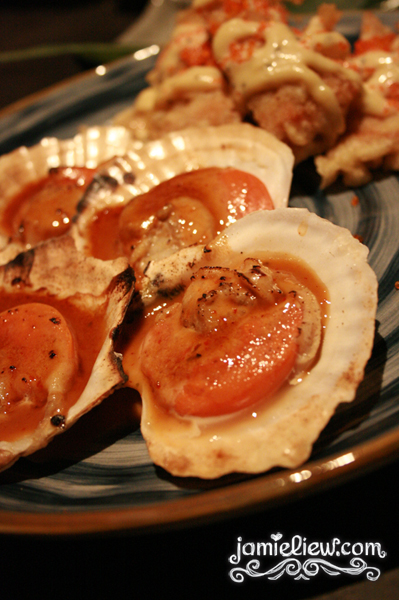 next, SCALLOP! great sauce, great texture. and the fried tuna (I think it’s tuna, not sure.) behind is also another wonderful dish. awwww. it’s all so nice. gosh. 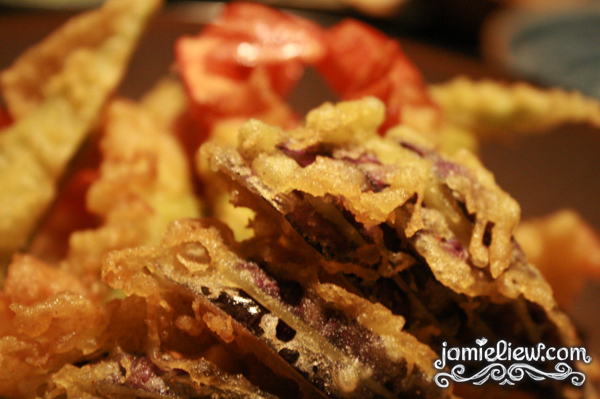 ha! I’ve never liked tempura~ =D. but this one is better as it is not as oily and the fried layer is not so thick. suits my taste at least. =P. 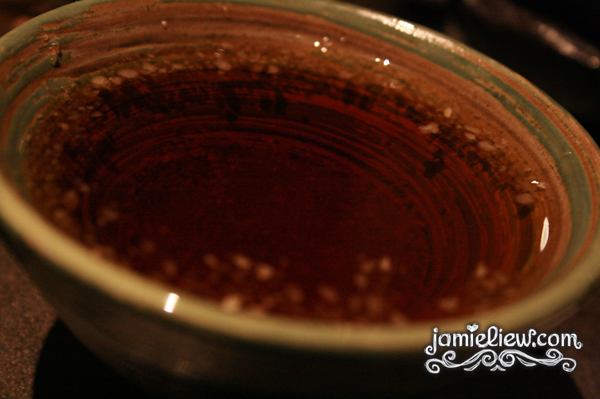 the dipping sauce. <3 the cooler the better. 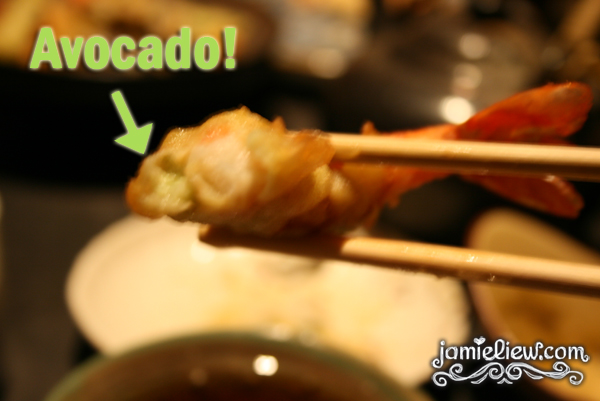 and another reason WHY I love their tempura’s? seriously, the taste of avocado with the prawn is greattt! 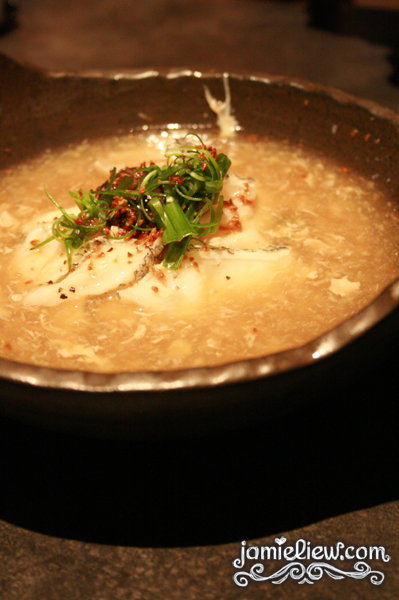 lastly, Cod Fish soup with Tofu (Gindara Mushi). the tofu’s below it. =D. if you’re a market person, I bet you know one of the most expensive fishes around (which could be found in the daily MARKET) is the cod fish. sweet, smooth and tasty, it’s one of my favourite fish. <3. and the combination of it is very very very good. I was wanting to critic a little because I have this little tendency of being a food critic in the future, but unfortunately, it all tastes so good that I have nothing to criticize. sigh. well, there is one! their toilet’s mirror! so tall that I can only see my eyes, but at the bright side, it makes the girls come out faster as they won’t be looking at the mirror.

and later on, we started laming =D. 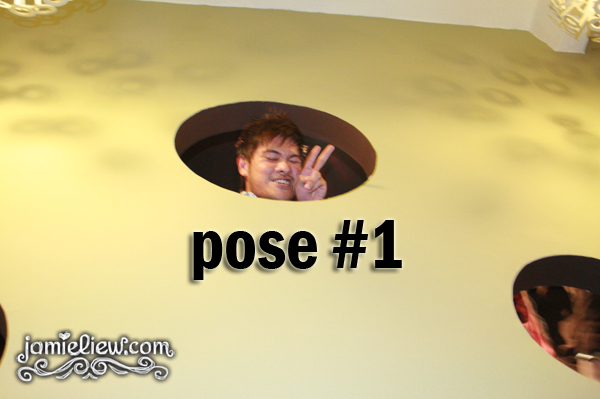 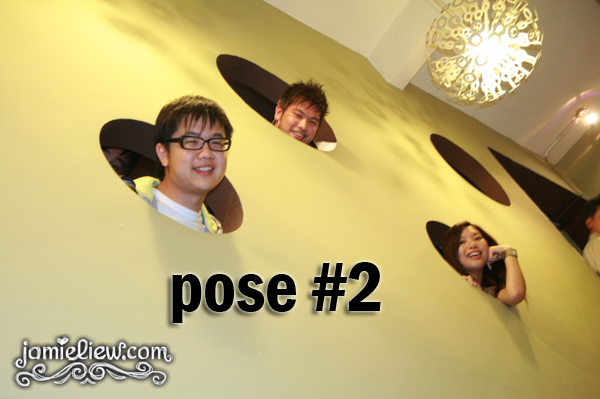 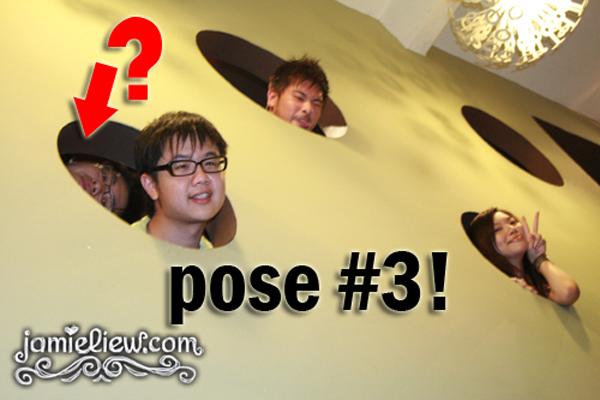 I didn’t know Wai Seng was there until I viewed back the pictures. =P. 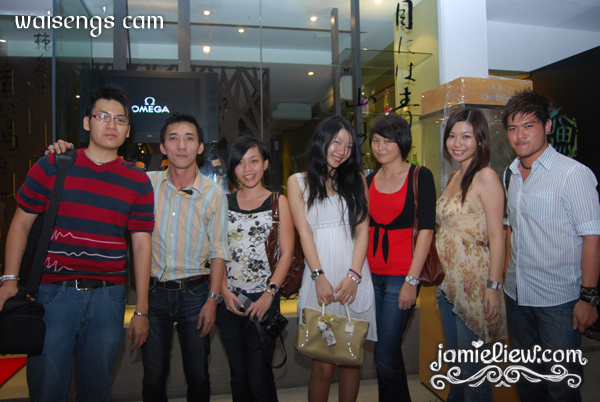 all of our satisfied and bloated up faces. we are all friggin’ FULL!

and also, Jamie won’t be satisfied without some camho pictures. =P. 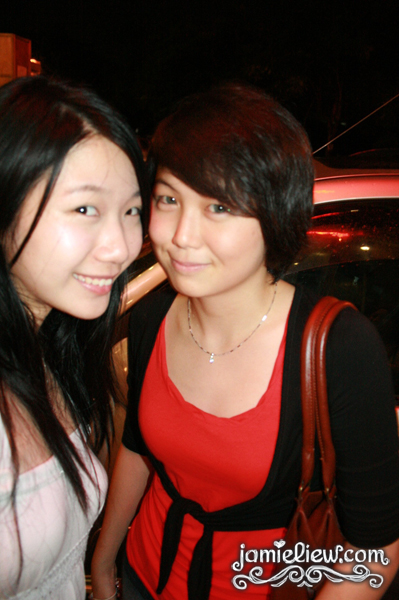 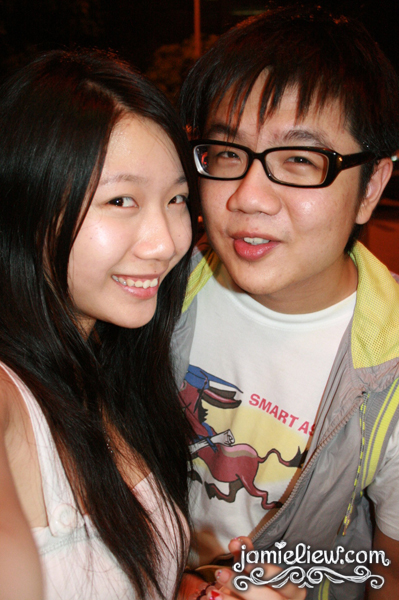 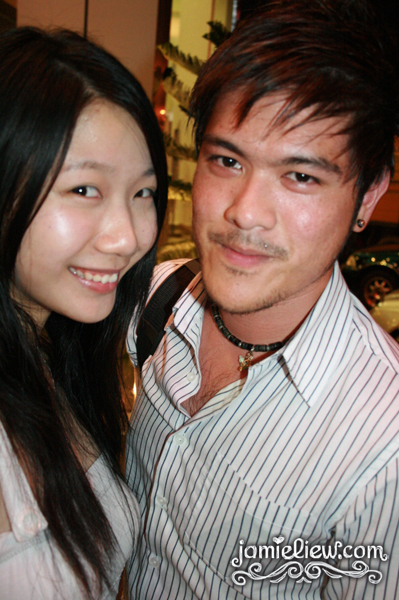 and Simon! ok, I bet you (anybody reading this) are thinking ” zomg, all the pix so alike also wanna post” so I’ll stop here, because, I camwhored with everybody. haha. 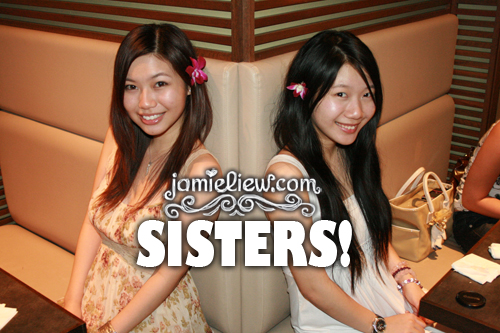 so this will be the last picture of the day. for all who have worried, MY SISTER REACHED XIA MEN SAFELY! and she’s now enjoying the food there T_T. pffts. if you want to get in touch with her, please message her in Facebook. =). DO NOT AS ME! I skype with her everyday so I don’t know the other ways. =P. okay, bye!

NOTICE : September promotion! say BLUP BLUP UMAI-YA and enjoy 10% off. ^^v. *if the waiter/waitress is a little blur, ask them to ask KK, but also, remember that this promotion only last during September!*

hey~ Nice meeting up with you~

I went to Jason’s cheese-like-wall because you said cannot see me in the other hole. LOL and I looked so stone in that pic behind Jason.

I suka the scallop sauce alot weh. so nice! When Umai-ya boss getting u a new camera? ^^

wow… the food looks really good! must bookmark and go there next time!

hmm you know a lot of good places to eat. not bad Miss LC 😀

heys!!!! its great meeting u babe. we shld meet up soon again. get smashpop to fetch u. hehe

Wow, the food looks good! Great photos too! Got to know about this through Angeline 🙂